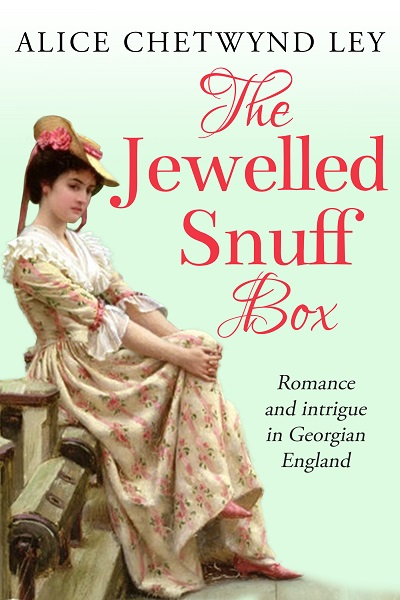 Young governess Jane Spencer is travelling to London when stormy weather forces her stagecoach to make a stop.

Battling through the snow to a nearby inn, she discovers a man, seemingly lifeless, by the side of the road. Though he appears to have been set upon by highwayman, they have left next to him in the ditch a clearly valuable jewelled snuff box.

When the man recovers his senses, he is dismayed to find he has completely lost his memory.

Sympathetic to his plight, Jane promises to help him discover his identity. But as soon as they reach London he disappears, leaving Jane with the snuff box…

Who was the enigmatic man? Why did he disappear?

And what secrets are hidden inside the mysterious jewelled snuff box…?

The Jewelled Snuff Box is the first novel by Alice Chetwynd Ley: a Georgian historical romance novel with a twist of suspense and mystery.

Endorsements
‘a cracking good tale, well paced, well told, with believable characters and plot twists that seem organic rather than arbitrary. I would recommend it for those looking for an old fashioned good read’
– Regency Retro Reads
Order Now