The Greatest Raid of All: Operation Chariot and the Mission to Destroy the Normandie Dock at St Nazaire

Home > Books > The Greatest Raid of All: Operation Chariot and the Mission to Destroy the Normandie Dock at St Nazaire 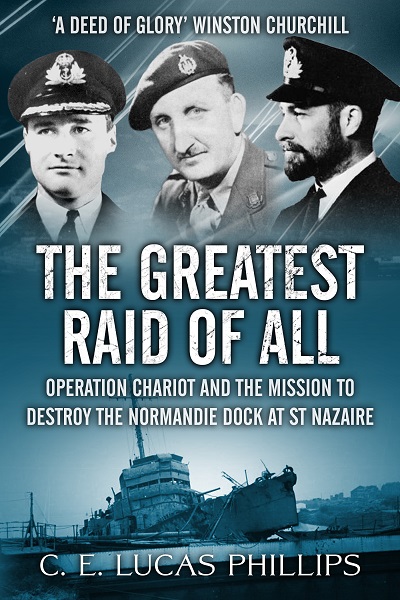 A vivid account of the famous St Nazaire Raid that demonstrates the sheer bravery of the British Commandos and the Royal Navy. An essential read for fans of James Holland, Ant Middleton and Cornelius Ryan.

HMS Cambeltown, supported by seventeen wooden motor launches, approached the German-held port intending to smash into the lock gates of the largest dock in the world, the Normandie Dock — Operation Chariot was in full swing.

Against vicious Nazi gunfire the commandos stormed the docks and within half an hour succeeded in their chief demolition objectives but in the heat of battle the Royal Navy had lost nearly all of its small vessels intended to carry them back to England. With their route home closed off the men were forced to fight through the town in a bid to escape German forces.

C. E. Lucas Phillips’ The Greatest Raid of All draws upon numerous British, French and German eyewitness reports to uncover the astounding true story of one of the most daring attacks of World War Two in which no fewer than five Victoria Crosses were awarded.