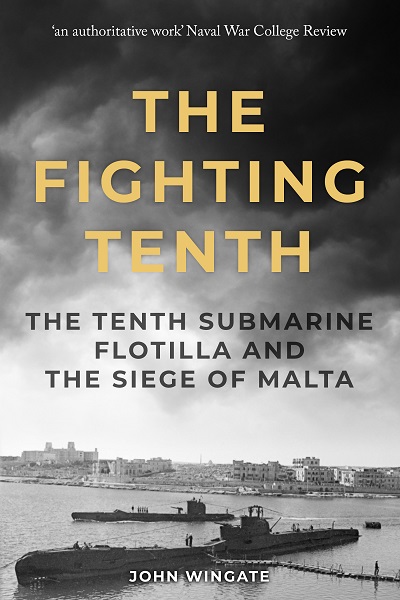 An epic account of ‘the most concentrated submarine battle in history’.

Between 1940 and 1944 the Tenth Submarine Flotilla fought a vicious campaign against German and Italian shipping that were supplying Rommel’s forces in North Africa.

From the small, beleaguered island of Malta, constantly under siege from Axis naval and air forces, the thirty-four submarines that served in the flotilla managed to sink over a million tons of Axis shipping, assisting to turn the tide of the war in the Mediterranean.

John Wingate served as first lieutenant in the Tenth Flotilla’s submarine United during this period and records in fascinating detail the deeds of this unique underwater strike force. Surviving Commanding Officers, sailors, as well as British and Maltese civilians, all contributed to Wingate’s book to give brilliant insight into how this conflict developed and what it was like to fight within it.

‘an authoritative work and a firsthand account of most aspects of this tale.’ Naval War College Review

‘an acclaimed source amongst today’s submarining fraternity’ The Times

‘a history of remarkable achievements attained by sheer hard work, dedicated attention to duty, remarkable personal bravery and high standards of professionalism — unfortunately at a tragic cost in human life.’ Admiral of the Fleet, The Lord Fieldhouse

The Fighting Tenth: The Tenth Submarine Flotilla and the Siege of Malta is a tense and gripping story that uncovers the exploits of this often overlooked but vitally important naval conflict from World War