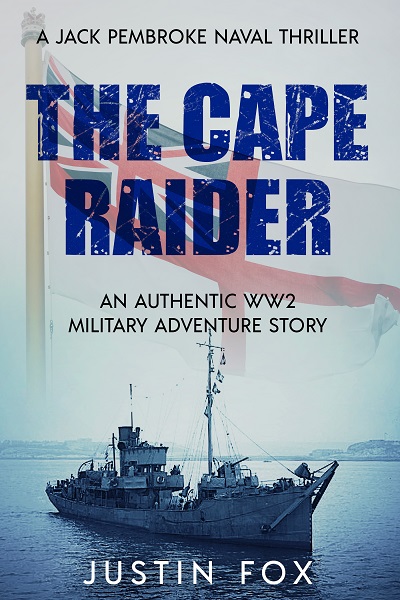 A fight to the death in foreign seas…

Scarred – physically and emotionally – by the brutal warfare at Dunkirk Jack Pembroke decides to leave his home in England to join his father, Admiral Pembroke, in the South African Cape.

A fledgling naval force is preparing to fight the coming onslaught of German raiders, and Jack is soon thrust back into action when he is appointed commander of a minesweeping flotilla.

Unknown to Jack, a Nazi commerce raider has left Germany for the Cape intending to wreak havoc on Allied shipping.

And it’s heading straight for him…

Under Jack’s command are an eclectic bunch of men who are unsure of their foreign captain. But he must unite them into a powerful fighting unit if he has any chance of defeating the dangerous enemy.

Can Jack overcome his demons and lead his men to victory?

Or will his first battle off the South African coast be his last…?

The Cape Raider is the first action-packed military adventure in the Jack Pembroke Naval Thriller series by Justin Fox.