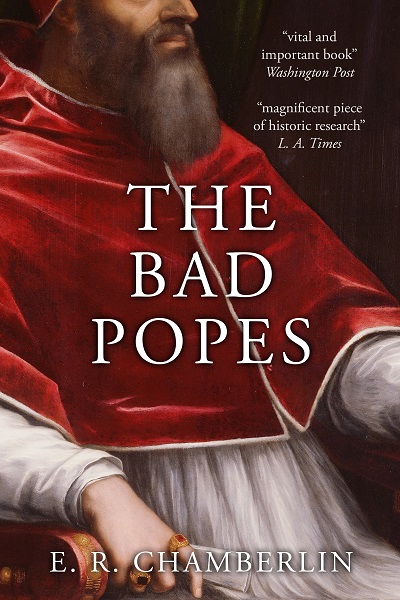 A dramatic account of some of the most notorious figures of medieval and Renaissance history who ruled from the Eternal City. Sure to grip readers of John Julius Norwich, Tom Holland and Peter Ackroyd.

The papal tiara has been worn by a number of infamous men through the course of its history.

Some have been accused of murder, many have had mistresses, while others sold positions in the church to their followers or gave land and wealth to their illegitimate children.

E. R. Chamberlin examines the lives of eight of the most controversial popes to have ruled over the Holy See, from the reign of Pope Stephen VI, who had his predecessor exhumed, put on trial and thrown in the Tiber, in the ninth century, through to Pope Clement VII, the second Medici pope, whose failed international policy led to the Sack of Rome in 1527.

The Bad Popes explains how during these six centuries the papal monarchy rose to its greatest heights, as popes attempted to assert not only their spiritual authority but also their temporal power, only for it to come crashing down.