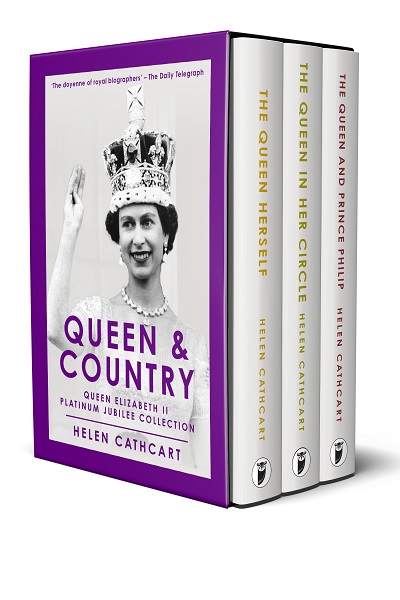 Released to coincide with Queen Elizabeth II’s Platinum Jubilee, Queen and Country is a sparkling celebration of the early years of Her Majesty’s life and reign: from a young girl who did not expect to be Queen, to an iconic and influential national figurehead.

Helen Cathcart’s Queen and Country celebrates the glorious reign of the British monarch with a collection of three fabulous biographies which include:

The Queen Herself
Born third in line to the British throne, Elizabeth never expected to be Queen, yet her destiny was fixed with the abdication of her uncle, Edward VIII.
Helen Cathcart’s fascinatingly intimate account charts Elizabeth’s extraordinary life, from her birth and early years growing up in the royal palaces – sleeping in the dungeons of Windsor Castle during the air raids of the Blitz – through to her marriage to Prince Philip in 1947 and their life together as new parents. The death of Elizabeth’s beloved father, King George VI, in 1952 saw her life change forever when at the age of twenty-five she became Queen.

The Queen and Prince Philip
Her Majesty Queen Elizabeth II and Prince Philip enjoyed seventy-three years of happy married life together – the longest marriage of any royal British couple in history. But how did they meet? What did their families think of their burgeoning relationship? What obstacles did the young couple face before and after their marriage? And how did a childhood friendship grow into the love story of the century?
Helen Cathcart superbly reconstructs the early years of Elizabeth and Philip’s relationship, tracing their growing affection from the summer of 1939, when ‘Lilibet’ was a teenager and Philip a dashing navy cadet, through their wartime courtship and magnificent wedding at Westminster Abbey in 1947.

The Queen in Her Circle
Written in Her Majesty’s Silver Jubilee year, here is the innermost story of Queen Elizabeth II amid her closest personal friends and working colleagues.
Helen Cathcart takes the reader on a unique journey from infancy up to the third decade of Her Majesty’s reign, highlighting the Queen’s influence upon her friends and Household, and their reciprocal influence upon the Sovereign. Along the way we meet the royal relatives, intimate acquaintances and trusted officials who have supported and guided Her Majesty from early childhood through to heiress presumptive to the throne and ultimately as reigning monarch.