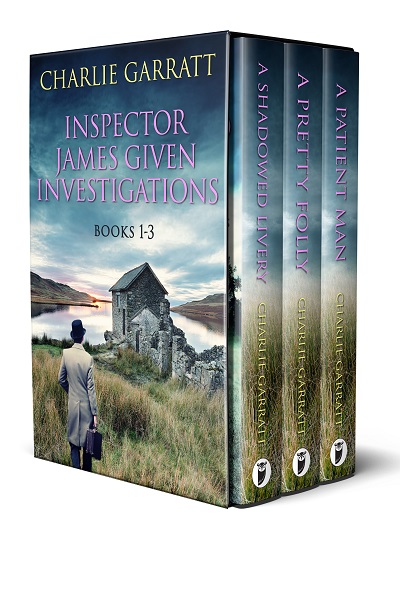 BOOK ONE: A SHADOWED LIVERY

While Hitler and Chamberlain are preparing to sign the Munich agreement, the murderer of a Jewish shopkeeper is being hanged in Birmingham. After witnessing the execution, Inspector James Given who brought the killer to justice, is surprised to find he has been taken off the investigation to pursue something completely different. Grovestock House, owned by the wealthy Barleigh family has witnessed a triple death. With the terrible events neatly written off as a murder and a double suicide, Given is supposed to tidy up a few loose ends with the help of local constable, John Sawyer. But Given is sure there is more to the case than meets the eye.

Murmurs of war are rippling through Europe, and violence against Jewish people is on the rise. Inspector James Given, himself Jewish by birth, but not in practise, is busy trying to stop attacks on Jewish businesses in Coventry. But then a murder case lands in his lap. A young girl’s body is found in the crypt of a prestigious school. Part-mummified, it is hard to discover how long she’s lain there. But why wasn’t she reported missing? Has no one been looking for her? And could more lives be at risk…?

The outbreak of the Second World War is announced and Inspector Given’s Jewish family is at risk. While Given travels to Europe in search of his uncle, a complicated case arises at home in Kenilworth. Before leaving, Given had been put in charge of a seemingly straightforward suicide case. But now the police suspect the man was murdered. As Given returns home he finds himself forced to investigate the brutal killing…

INSPECTOR JAMES GIVEN INVESTIGATIONS is a boxset omnibus edition comprised of the first three historical mysteries in the The Inspector James Given series – traditional British investigations set in England before and during the Second World War.