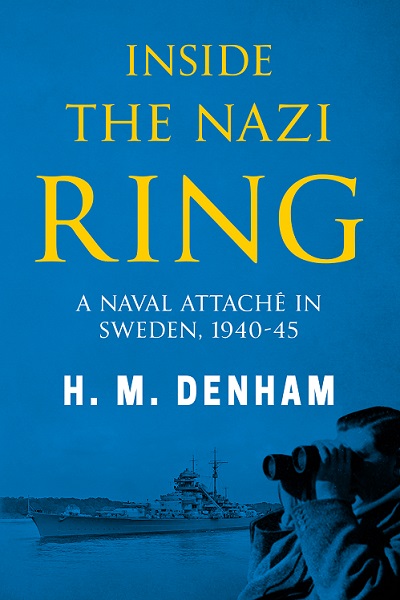 It was to this country, surrounded by Axis forces, that Captain H. M. Denham was posted as Naval Attaché, arriving after evading capture by the Nazi Wehrmacht in the summer of 1940.

Over the course of the next five years Captain Denham used his position to covertly provide valuable intelligence to the British military, such as the Bismarck’s attempt to break into the Atlantic Ocean and raid Allied shipping. Thanks to his information the terrifying battleship was sunk just eight days later.

The Swedish were suspicious of Denham, resulting in the Swedish Secret Police even bugging his flat, yet he remained free and continued to acquire and pass on information throughout the war.

Denham gives vivid accounts of his meetings with numerous important political and military figures, such as King Gustav V of Sweden, Field Marshal Mannerheim of Finland, Admiral Raeder, leader of the German Navy, the Soviet minister, Alexandra Kollontay, as well as various members of the Nordic intelligence services.

Inside the Nazi Ring: A Naval Attache in Sweden, 1940-1945 provides a unique viewpoint of the Second World War, uncovering not only his actions aiding the British cause but also the history of the Scandinavian nations through the conflict.

Captain Henry Denham ‘found himself caught up in all sorts of intrigues and adventures that are not normally part of a naval officer’s lot; and future historians of the Second World War as well as his many friends and admirers will be delighted that he has written this absorbing account of them.’ Sir Ludovic Kennedy