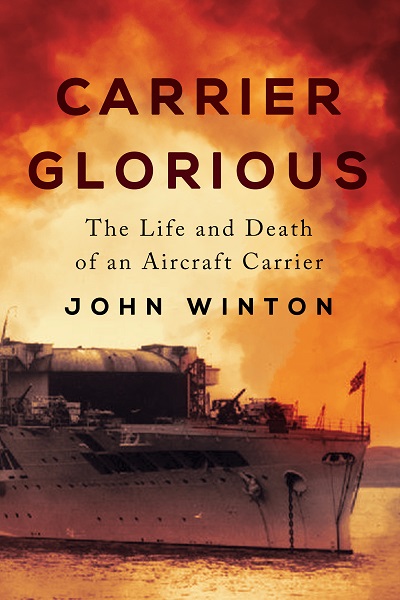 The engrossing but tragic history of the Royal Navy’s worst loss of World War Two.

On 8th June 1940, the British aircraft carrier HMS Glorious and her two destroyer escorts HMS Ardent and Acasta were sighted by the German battle cruiser Scharnhorst and her sister ship Gneisenau. In a brutal gun battle that lasted over an hour all British ships were sunk and more than 1500 men lost their lives.

Why had Glorious left the main troop convoy to proceed independently? Why was she so lightly protected? Why did British Intelligence give no warning that the German battlecruisers were close by? And why were the survivors left in freezing Arctic waters for three days before being picked up?

Official documents do not answer these questions and so John Winton has drawn testimonies from men who served on Glorious in the pre-war days as well as her very few survivors to understand how this ship functioned both before and during the war, what happened on that fateful day and why is there still so much secrecy surrounding this heart-rending event.

Carrier Glorious: The Life and Death of an Aircraft Carrier is an extraordinary history of this ship from her early beginnings as a battle cruiser in the First World War to her conversion into an aircraft carrier and service through the interwar years before uncovering what truly went on in her battle with the Scharnhorst and Gneisenau.