Below the Belt: Novelty, Subterfuge and Surprise in Naval Warfare K

Home > Books > Below the Belt: Novelty, Subterfuge and Surprise in Naval Warfare K 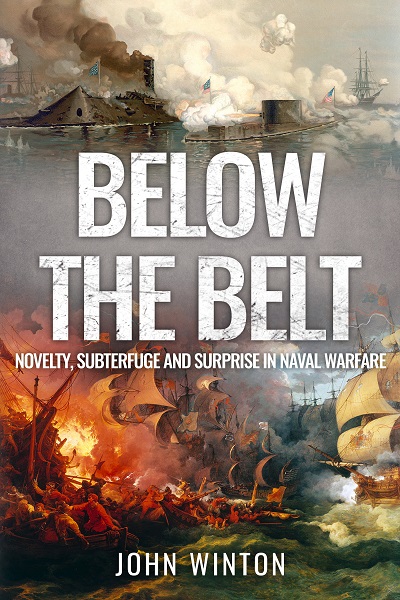 A remarkable history of unorthodox naval weapons and strategies from the days of the Ancient Greeks to the end of World War Two.

From Phormio to Nelson to Mountbatten, naval strategists have sought to gain the upper hand against their opponents by utilising new weapons and unusual tactics. Fireships, midget submarines, armour plating, mines, along with dramatic shifts in naval formations and many other innovations are all explored.

John Winton’s engrossing book demonstrates how some of these developments became standard methods of naval warfare, while others had their day and then vanished, or were replaced by newer inventions and ideas.

Drawing information from a wide array of sources from across the globe, Below the Belt charts over two thousand years of naval history, uncovering ingenious devices and tactical masterstrokes that turned the tide of battles on water.

‘an interesting account that will appeal to any naval history fan who is interested in the unusual side of war at sea.’ Warship International