Arctic Rescue: A Memoir of the Tragic Sinking of HMS Glorious

Home > Books > Arctic Rescue: A Memoir of the Tragic Sinking of HMS Glorious 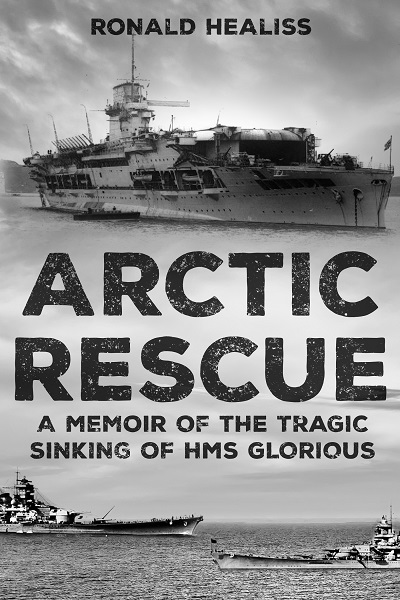 On the 8th June 1940, the Nazi battleships Scharnhorst and Gneisenau opened their guns on the aircraft-carrier HMS Glorious.

Within minutes the Glorious was taking on water and the order was given to abandon ship.

Hundreds of men leapt into the icy waters of the Norwegian Sea. They hoped and prayed that nearby ships would have heard their distress signal and send help.

Yet, they did not come. Men were left to tread water, hold onto small inflatables or clamber onto overcrowded lifeboats. The situation looked bleak for the few who survived the first twenty-four hours; there was nothing to eat and men resorted to drinking saltwater and their own urine to slake their thirst, but the effects of hypothermia and delirium began to take their toll.

Over 1,200 men lost their lives as a result of this tragedy.

Only forty men survived this ordeal, one of which was Royal Marine Ronald “Tubby” Healiss, who served as a member of a 4.7 gun crew on the Glorious. His award-winning account is a true and terrible record of suffering, which uncovers one of the greatest undocumented naval stories of the Second World War.