America’s Forgotten Army: The True Story of the U.S. Seventh Army in WWII 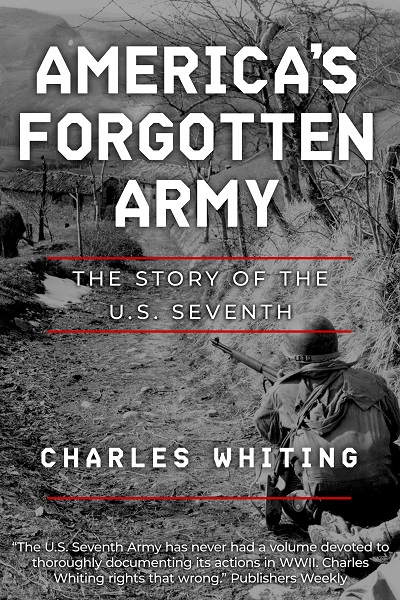 An enthralling account of the World War Two exploits of the U.S. Seventh Army, from Sicily to France to the final assault on Hitler’s mountain retreat, the Eagle’s Nest.

Although overshadowed by the other Allied armies fighting in Europe, the impact of the U.S. Seventh Army on the course of the Second World War was monumental and its achievements deserve to be remembered.

In Sicily, under the command of General George S. Patton, it swept away Axis forces as it captured village after village. It then moved northwards charging “up the gut” of Nazi-held Europe.

Charles Whiting uncovers the actions of this overlooked army and its men — charging against dug-in German machine gun nests, launching ferocious attacks on the bloodied snows of the Alps, and fending off terrifying Panzer-led counterattacks.

This book also draws attention to many of the fascinating figures who led it, from Patton to his successor as commander of the Seventh General Alexander “Sandy” Patch, to the numerous brilliant soldiers that fought under them, including the dynamic Lucian Truscott, daredevil Robert T. Frederick, aggressive “Iron Mike” O’Daniel, talented Frenchman Jacques LeClerc, and of course America’s most decorated soldier, Audie Murphy.

“an enjoyable and illuminating account of this relatively forgotten army’s distinguished career.” HistoryNet

“The U.S. Seventh Army has never had a volume devoted to thoroughly documenting its actions in WWII. Charles Whiting rights that wrong.” Publishers Weekly

America’s Forgotten Army should be essential reading for all wishing to find out more about this force that smashed Nazi forces wherever it met them.
Read less