Michael Fowler is the author of the DS HUNTER KERR INVESTIGATIONS series.

In 2010, after 32 years as a cop, and an even longer time as a passionate writer and lover of crime fiction, Heart of The Demon — the first in the DS Hunter Kerr series — materialised as the book I always told myself I could write. 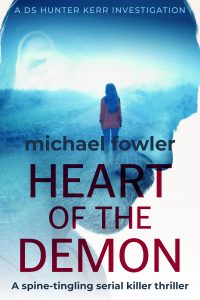 It is inspired by a true crime event. As a Detective Sergeant, I was following up information in relation to a girl who had been missing for a number of years, and much of her previous history was recorded on her original missing report that had been filed away and stored in the basement at Barnsley Police station.

Whilst seeking it out, I came across a large cardboard box, which, upon rooting through, I found it contained the court file and crime scene photos for a man called Peter Pickering, who was dubbed ‘The Beast of Wombwell,’ and I couldn’t resist rummaging through the contents to get an insight into his crimes.

Peter Pickering was first convicted of attacking two schoolgirls in 1966 and was jailed for six years.

In 1972, five months after his release, he abducted 14-year-old schoolgirl Shirley Ann Brody in his home town of Wombwell, near Barnsley, drove her to secluded woodland, where he raped her and stabbed her while wearing yellow washing-up gloves — a detail that gave rise to his other tabloid nickname, the “maniac in the marigolds”.

Following that murder he was locked up in a psychiatric hospital, but it was always believed he had committed more attacks and murders, and he was interviewed by detectives on numerous occasions over several decades. The focus of those interviews were the murders of 14-year-old Anne Dunwell, from Rotherham, in 1964, and 14-year-old Elsie Frost, from Bradford, in 1965.

He refused to cooperate. However, following another investigation, detectives found evidence linking him to the rape of a Sheffield woman, committed just weeks before he abducted and murdered Shirley Ann Brody, and last year, at the age of 80, he was convicted of that rape.

Early this year Pickering died, taking his secrets to the grave. The finding of the Peter Pickering case file in Barnsley Police Station basement became a light-bulb moment for me as a writer, and has not only provided some of the background for Heart of the Demon, but has also inspired another of my Hunter Kerr novels, Shadow of The Beast.

Michael Fowler is the author of the DS HUNTER KERR INVESTIGATIONS series.

Click here to order HEART OF THE DEMON now!