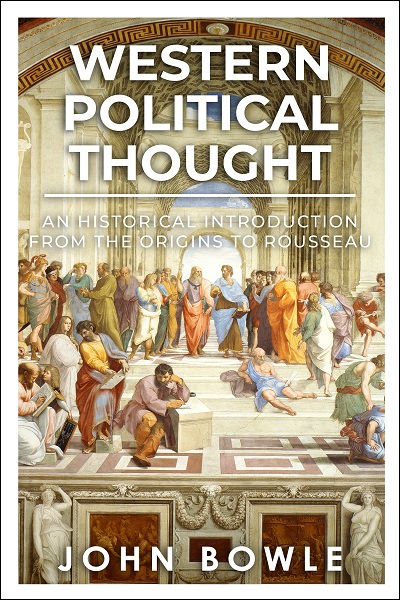 ‘historical and panoramic approach to the field of political theory. It is written in that clear, fluent, and often truly beautiful style.’ The Journal of Politics

How did ideas such as liberty, democracy and equality develop in the West over the course of thousands of years? What is justice, the nature of the state, citizenship and the role of religion? And why should we study the history of political thought to understand contemporary society?

Exploring the long-term development of political thought allows John Bowle to explore these challenging questions and themes. Introducing the reader to many of the central figures in the history of political thought from Aristotle to St. Augustine, Machiavelli to Rousseau, Bowle provides wonderful insight into their ideas and writings and how they have influenced the world even to this day.

‘This is a good and useful book. It is written modestly, as an introduction to a large subject, and with the intention of bringing the reader to the master-works described in the text. Mr. Bowle, however, does more than parade a string of racehorses and give the bystanders short accounts of their pedigree and form. He relates the thought of an age to its general context in political and social history and explains why problems of universal interest took at different times their particular shapes. Mr. Bowle’s historical comments (including his footnotes) are vivid and exact… at a time of much weariness and pessimism, his account of the rise of the western tradition of political thought deserves a wide circle of readers.’ The Economist

‘This first volume deals with the evolution of western thought from the beginnings of what we agree to call “civilization” down to the French Revolution. Let me say at once that it is an exhilarating and even exciting book… Mr. Bowle writes with a good deal of learning, and in a pleasant dignified style… No one I think who’s interested in the unending adventure of the human mind could fail to be interested by these really illuminating pages.’ Prof. Harold Laski in a B.B.C. review