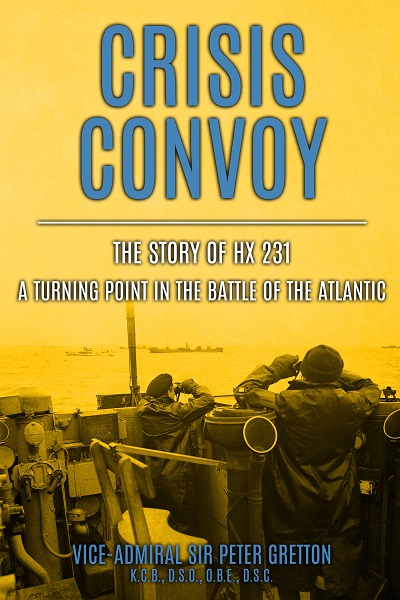 An engrossing account by the Royal Navy commander who led the escort of convoy HX231 during the Battle of the Atlantic.

A dramatic hour-by-hour narrative of an Atlantic convoy battle that changed the course of World War II, perfect for readers of Jonathan Dimbleby, Richard Freeman and Max Hastings.

In April 1943, Commander Peter Gretton in charge of escorting a vital Allied trade convoy from New York to Great Britain across the North Atlantic. Over the course of the voyage, the sixty-one merchant ships of convoy HX231, along with the six ships of B7 Escort Group, were continuously shadowed and attacked by a German wolf pack of twenty U-boats.

With the aid of air support, the convoy and defending escort fought valiantly across hundreds of miles of ocean and, despite poor weather conditions, managed to sink and severely damage several enemy submarines. Tragically six merchant ships were torpedoed and with no rescue vessel any survivors were left stranded in the freezing waters of the Atlantic as the convoy continued on its journey.

Drawing on reports from both sides, Gretton details the sequence of events as convoy HX231 battled its way through a large wolf pack and offers an authoritative post-battle analysis of the strategies, decisions and actions taken that would ultimately see the tide of war turn in favour of victory for the Allies.

Crisis Convoy takes the reader to the heart of the action and is a thrilling account of naval warfare during World War II.