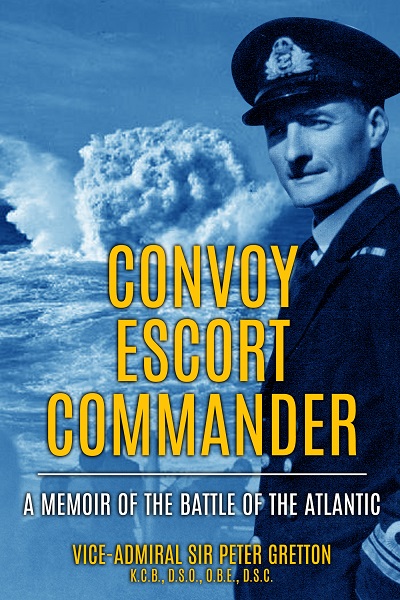 Vice Admiral Sir Peter Gretton’s book is a brilliant account of his career in the navy through World War Two: fighting in the Second Battle of the Narvik, guarding convoys in the Mediterranean and the North Atlantic, before being placed in charge of Escort Group B7, which he described as “the finest job in the Navy for a new commander”.

It was in this role that Gretton, and the seven warships under his command, were able to make their contribution to turning the tide against the U-boat threat.

On the 22nd April 1943 Gretton was in charge of the escort for Convoy ONS 5 during its journey across the North Atlantic. Over the course of the voyage they were attacked by over fifty U-boats, and although they lost thirteen ships they managed to sink six U-boats and seriously damage many more.

The U-boats had never faced such fierce resistance to their lethal raids. As the great historian Samuel Eliot Morison stated: “the glorious battle of a British escort group under Commander P. W. Gretton to the Westbound convoy ONS 5 is regarded by both the Allies and the Germans as a turning point in the struggle for the North Atlantic.”

What tactics had Gretton used to fend off Doenitz’s terrifying submarine wolf packs? And how had these strategies developed over the course of the war?