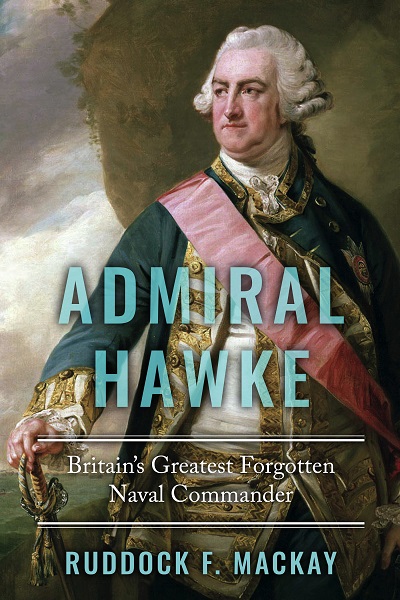 Edward Hawke’s naval victories were matched only by Horatio Nelson, but few remember him today. So who was this naval genius and what was his contribution to the history of the Royal Navy?

In the fading light of the 20th November 1759 Hawke led his ships to attack the French fleet in the treacherous waters of Quiberon Bay. After a three-hour struggle the French squadron had been devastated. The battle ended French invasion plans, signaled the rise of the Royal Navy and confirmed Britain’s position as the world’s foremost naval power.

How did Admiral Hawke, the son of barrister, rise to become one of Britain’s greatest admirals? And how important were his victories against the French through the course of the mid-eighteenth century?

Admiral Hawke by Ruddock F. Mackay charts the story of this remarkable figure, from his long-apprenticeship at sea, learning the art of naval command, to his first major victory in the Second Battle of Cape Finisterre, finishing with his final years as First Lord of the Admiralty.

‘The accounts of naval operations are well constructed, and the necessary background for understanding strategy and tactics is amply provided. … Mackay’s research carries authority; the reader feels he knows where the ships were and why.’ The American Historical Review

‘Ruddock Mackay in his Admiral Hawke has given us a more complete biography, based on documents that [previous historians] never saw and on obviously more effective research techniques.’ The Journal of Modern History