Write About What You Know by Keith Moray

I began my writing career many moons ago when I was studying medicine at the University of Dundee in Scotland. At that time the city was famous for the ‘three J’s’ of Jute, Jam and Journalism. Journalism referred to the publishing firm of D C Thomson, which produced the famous Beano comic and countless other publications.

I submitted a few children’s stories to the People’s Friend, a well known family magazine that is still going strong today. To my surprise and delight they were accepted and I was soon regularly writing stories for the Children’s Corner on the inside back page. 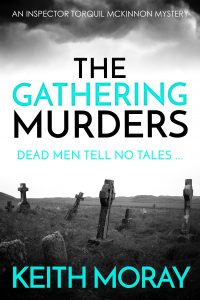 Then once I had graduated I moved to Hull. While I was working in cardiology I learned that the Kingston-upon-Hull telephone exchange had a ‘dial-a-bedtime’ story service. For the cost of a phone call parents could have a short three-minute bedtime story told to their youngsters over the phone. My stories were soon being recorded and heard by youngsters all over the city.

Inevitably, I longed to have my name on the spine of an actual book. It was then that I came across that old adage, ‘write about what you know.’ It is one of the nuggets of writing wisdom, except it is often misinterpreted.
In my case as a medical doctor I assumed that it mean that I should write a medical thriller or maybe a medical romance. My problem was that I worked in medicine and didn’t want to spend my thinking and writing time in medicine as well. So I had several false starts on various non-medical novels, and like most writers I have a drawer full of opening chapters for several books that never saw the light.

Then it dawned on me. It didn’t mean that I had to write exclusively about a medical world, but that I should use my medical knowledge to really make a character stand out and be believable. Or I should be able to drip in details about drugs, operations, or snippets of medical history, to give the work authenticity. And that is just what I did in my first western novel Raw Deal at Pasco Springs. I did the same with several other westerns before turning to crime!

I began by creating West Uist, an island in the Outer Hebrides of Scotland and peopled it with believable characters, including the local doctor, who doubles as a police surgeon. On the island my detective, Inspector Torquil McKinnon can solve crimes using his brains rather than depending upon forensic science and DNA. Yet in The Gathering Murders, the first novel in the series there is still plenty of medicine peppering the plot.

Crossing one genre gives you the confidence to do it again. The bridge that I use is medicine. I am able to create believable medical situations. For example, I write collaborative western novels with some other writers in the USA. We have created a town called Wolf Creek and each collaborator writes one or two chapters per novel from the viewpoint of his or her character.

My character is Dr Logan Munro the town doctor, who extracts bullets, sets broken bones and delivers babies. Similarly, I use my knowledge of the history of medicine in my historical novels, The Pardoner’s Crime and The Fool’s Folly, which are set in the thirteenth and fourteenth centuries.

Essentially, my message is that you don’t have to set your story in your relevant world. What you can do is drop in a character that shows your expertise. That is my interpretation of the axiom ‘write about what you know.’