The Scorpion Squad Military Thrillers follow an American Battalion fighting in the Vietnam War. Below, Kevin D. Randle (Lt. Col. USAR) — one of the authors behind the pseudonym Eric Helm — reflects on the real-life experiences that provided the inspiration for the series.

I graduated high school the day before my 18th birthday in June 1967. In July, I was on a bus headed to Fort Polk, Louisiana, for basic 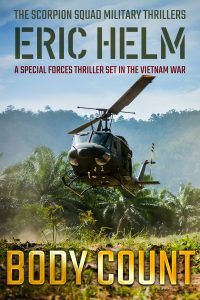 infantry training and in October, I was assigned to Fort Wolters, Texas, for my AIT, advanced individual training, which was as a helicopter pilot. From there I was sent to Fort Rucker, Alabama, to complete that training. In August 1968, as a 19-year-old teenager, I was appointed a warrant officer and then graduated from flight school as a helicopter pilot.

On September 23, 1968, I arrived in South Vietnam. We landed at Ton Son Nhut and were herded aboard buses that had no air conditioning. We all were covered with sweat within minutes of leaving the aircraft. The bus had screens over the open windows, but the pattern was something like an inch square. It wouldn’t keep out the insects. Someone said it was to keep out the grenades, and someone else said, “Yeah. Now they tie fishhooks to them.”

From Saigon we drove to Bien Hoa, Long Binh complex and the 90th Replacement Battalion. From there, a day or two later, I, with three other warrant officers, was assigned to the 116th Assault Helicopter Company at Cu Chi. 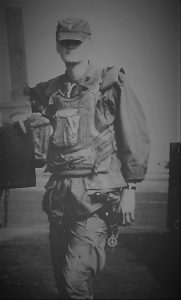 Kevin Randle after a day of flying combat assault missions in Vietnam.

During that first week, I flew rarely. There was an orientation flight to show me the local area. There was a check ride to ensure that I knew what to do if the engine quit, and to demonstrate my other skills. When that was completed, I was assigned to a flight, and then began flying combat assault missions. That meant that we picked up soldiers in one place, took them to another and landed. While many of those missions were without incident, some of them were more than a little exciting. Nothing beats sitting in a pick-up zone to evacuate soldiers while the enemy pumps small arms fire into the flight. You’re sitting in a plexiglass encased cockpit, easily visible to the enemy and have no recourse but to sit there as the windshields break and the instrument panel disintegrates.

One of the first night missions I flew, as what was known as a peter pilot, meaning that I was the co-pilot, was into an PZ we knew was going to be hot. The soldiers were taking fire and we were going to extract them. There were tracers flying all over the place. Red ones from our weapons and green and white ones from the enemy. They dropped a few mortars on us as well, which erupted into a shower of sparks and had that been just a little more colourful, it would have looked like fireworks. 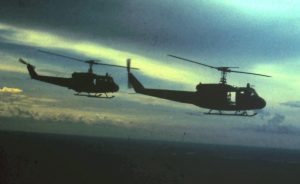 Flying formation on the way to a combat assault.

Everyone took some hits, but most of the damage was superficial. One of the aircraft, if I remember correctly, was left in the PZ. The engine had been hit and failed. The crew was picked up by another aircraft, which means that they abandoned the aircraft and ran to one of the others. The gunships, which had been working over the tree lines and enemy positions, took it out with rockets, setting it on fire to prevent the enemy from getting anything of value from it.

We were on the ground for thirty seconds to one minute as the soldiers scrambled onto the helicopters. Our door gunners and crew chiefs used their M-60 machines in an attempt to suppress the enemy fire. They aimed at the muzzle flashes of the enemy weapons.

That was the last flight that night. Once we had the soldiers out, I suspect the Air Force might have dropped some ordnance on the enemy positions, or the artillery might have dropped a few rounds on them. I really don’t know. Once we dropped off the soldiers, we were released and returned to Cu Chi so that maintenance could patch up the aircraft.