Why I’m Addicted to Crime Thrillers by Gaynor Torrance

Gaynor Torrance is the author of the DI JEMIMA HUXLEY THRILLERS series.

Like many other people, I’m a crime thriller junkie. I can honestly say that books in this genre are my guilty pleasure — as well as chocolate, of course. As far as I’m concerned, it has to be well-written and absolutely has to have a complex plot. I need an abundance of twists and turns, along with a large helping of red herrings. If it keeps me guessing, it will offer me everything I expect from a good book.

I want the story to grab me and not let go. Whenever this happens, my own identity quickly fades into the background, and I become the protagonist. Gender is unimportant to me. I don’t care whether the protagonist is male or female. The only thing that matters is that I inhabit a world I would shun in real life. Fictional characters are instantly relying on me, and I’m desperately trying to save lives whilst I figure out what’s going on. 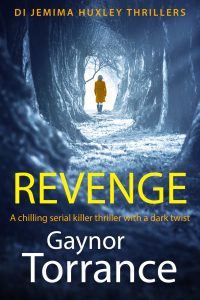 From the safety of a comfy armchair, these books have transported me to places I’ll never visit. They’ve presented me with opportunities to solve mysteries. Allowed me to get up close and personal with some of the most evil and twisted minds you could ever imagine. Over the years, I’ve brought justice to victims, been caught up in life-threatening situations and sometimes even had a hand in saving the world from imminent disaster.

Immersing oneself in these fictional scenarios is my ultimate form of escapism. It’s a white-knuckle ride minus the personal risk.

Having so many ideas of my own, I decided to take things a step further. And so I began writing about Detective Inspector Jemima Huxley, whose stories are set in Cardiff, a city I know well.

I love Jemima, but that’s because I know what makes her tick. I appreciate that on first appearance, she’s perhaps not the most likeable of characters. In Revenge, which is when readers are introduced to her, she comes across a bit like Marmite. She’s not a typical lead detective, and this will polarise opinion, as you’ll either love her or hate her.

When I created Jemima, I wanted her to have an interesting backstory. Over the years, I’ve read so many crime novels that have a hard-nosed lead detective heavily dependent on alcohol. Or whose personal relationships are in tatters because of the pressures of the job.

DI Jemima Huxley is different. She’s a modern woman who gets stuck in and excels at her job. Jemima is determined to have it all. At work, she’s a capable, dedicated detective: loyal, brave and intelligent. If only she had more control over other aspects of her life…

If you’ve read Revenge, you’ll already know that Jemima has some serious personal issues. She’s hiding things from everybody. Her mental health is suffering, and she’s in danger of falling down a rather large rabbit hole.

Most importantly, Jemima hasn’t yet figured out what’s at the root of her problems. I have a feeling that that epiphany is a long way off, and until it happens, there’s little chance she’ll begin to turn things around.

Jemima’s personal torment manifests itself in a way that is guaranteed to upset some readers. And I’ll let you in on a secret — I’ve shed tears as I’m writing those scenes. What Jemima does to her body is shocking, brutal and heartbreaking. But her method of keeping a lid on things is a reality for some people.

It’s a sad fact that mental health issues are still stigmatised. And, like many others, Jemima feels compelled to hide her suffering for fear of being judged.

But Jemima isn’t the sort of person to give up easily. She has her low moments but always seems to manage to pull herself together and face whatever life throws at her. Any serial killers stalking the streets of Cardiff had better watch out, because Jemima’s returning soon to investigate her next big case, Sole Survivor!