Keith Moray is the author of the SANDAL CASTLE MEDIEVAL THRILLERS, historical murder mysteries set in Yorkshire. The first two books in the series, THE PARDONER’S CRIME and THE FOOL’S FOLLY, are available to pre-order. 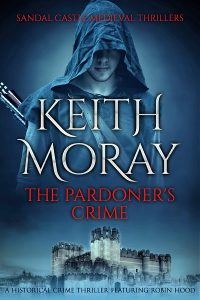 I live within arrowshot of the ruins of Sandal Castle. As a family doctor in Yorkshire, for thirty years I saw it most days while driving around the area on my morning visits. Nowadays, in semi-retirement I go running around the old battlefield where thousands of knights and soldiers once fought and died during the Wars of the Roses.

I plot and daydream when I run. Happily, a short story entitled The Villain’s Tale about a miscreant in a rat-infested dungeon in Sandal Castle won a Fish Award. It spurred me on to start plotting the Sandal Castle Medieval Thrillers.

The fine old motte and bailey was built in the 12th century by the De Warenne family during the reign of Henry I. From the 14th century it passed into royal ownership and is best known for its involvement in the Battle of Wakefield in 1460, when Richard, Duke of York was mortally wounded.  His son, King Edward IV established it as one of the two bases for the Council of the North in 1472. Effectively, this was the government for the North of England. After he died, his younger brother, King Richard III began rebuilding the castle in 1483. The work stopped when he lost his life at Bosworth Field in 1485. 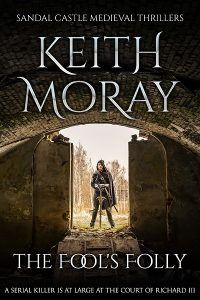 Thanks to television and movies, most people associate the outlaw Robin Hood with Sherwood Forest and Nottingham. However, the medieval ballads say that his stomping ground was actually Barnsdale Forest, which once covered a vast swathe of Yorkshire. The ballads also mention King Edward and various Yorkshire characters, such as George-a-Green the Pinder of Wakefield, and many actual locations in Wakefield are referred to.

The Court Rolls of the Manor of Wakefield

The outlaw and bowman Robert Hode, a sure candidate for being the historical Robin Hood, is mentioned in the Court Rolls of 1316. 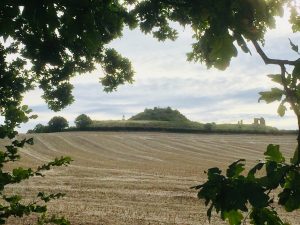 If you look at the picture of Sandal Castle today you will see exactly where I had the germ of the idea for The Pardoner’s Crime, the first novel in this series. It is a view of the castle from under what I fancifully call Robin Hood’s tree. I blended historical facts, medieval ballads and a good deal of imagination to come up with a historical whodunit.

There are three completed novels and a fourth in the pipeline. They are not all about the same characters; indeed they are set at different times, because Sandal Castle with its fascinating history is the historical backdrop to them. They are all inspired by Chaucer’s The Canterbury Tales and some of the characters that he described so beautifully. The Pardoner’s Crime fuses The Canterbury Tales with the Robin Hood legends. The reader is challenged to uncover the true villain in each novel.