The Road to Runnymede is Out Now

Congratulations to David Field, whose gripping historical saga, The Road to Runnymede, is out now!

The Road to Runnymede is the sixth historical novel in The Medieval Saga Series – thrilling action-packed adventures set during and after the Norman Conquest. 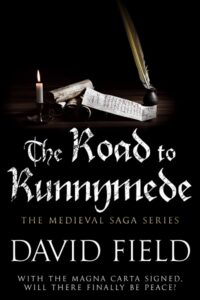 After the death of Richard the Lionheart, his brother, John takes the English throne with the support of his mother, Eleanor of Aquitaine.

But John has a rival in the person of young Arthur, Duke of Brittany, who Richard had acknowledged as his rightful heir.

Arthur’s claim is the superior one under Angevin law, and it is backed by the majority of the nobles in Maine and Anjou, supported by King Philip II of France, who is anxious to break up the Angevin Empire.

John’s preference for foreign favourites, his heavy taxation of the English nobility to fund his military failures, his brutal reaction to opposition and his belief in his divine right to rule provoke a powerful group of barons into a rebellion.

But when John agrees to sign the Magna Carta, a fragile peace is restored.

It doesn’t take long for John to renege on his word. And the barons respond by inviting the young Prince Louis of France to invade.

In the midst of all this chaos, Earl Hugh of Flint, together with his powerful cousin Earl Ranulf of Chester, find themselves reluctantly serving a king who is destroying their country from within.

Their lives, their families and their estates are continually at risk as England turns on itself.

Who will emerge victorious? Will a new king bring stability?

Or is England doomed to once more be thrown into a period of turmoil…?