Simon Michael is the author of the Charles Holborne Legal Thrillers, set in the 1960s. The Waxwork Corpse is Book Five in the series.

Like all the books in the series, The Waxwork Corpse is based on real events and real cases but this one you may remember, because it made the headlines. 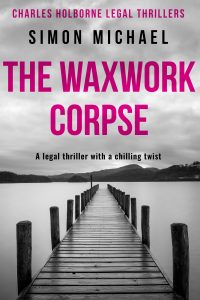 In 1984 a man was arrested in connection with the death of his wife, a body having been found in Wastwater, the deepest lake in England, almost a decade after she went missing, supposedly with her lover.

I learned of the case while waiting in a barristers’ robing room for a jury to return with a verdict. How the killer had dropped the body tied to a kerbstone, in the middle of the night, from an inflatable dinghy into the dark waters of Wastwater. How it had, in a one in a million mischance, landed on the ledge of an underwater pinnacle named Tiffin’s Rock. How, in another extraordinary twist of fate, the ledge was at the perfect depth for the water temperature to preserve the body (the tissues had become “adipose”, wax-like, and so remained recognisable so many years later). And how, extraordinarily, the police happened to be looking for a missing young woman in the same area shortly after an amateur diver first saw the body underwater.

It would, I knew, make a wonderful story, and some years later, following the killer’s conviction for manslaughter and his discharge from prison, I got in touch with his solicitors. Did they think the man would allow me to interview him with a view to writing the story, I asked? They replied in the affirmative and, to my complete astonishment, sent me the case papers, witness statements, photographs, pathology and scientific reports — the complete file.

By then the man was out of prison, running a small B&B in a remote part of England. I got in touch and asked if I could come to interview him, and he agreed. Perhaps rather thoughtlessly in retrospect, I decided that the trip offered the perfect opportunity to take my wife and new-born daughter for a short break away from London.

The plan was to drive from London on Friday afternoon and spend the weekend at the B&B. My wife could walk on the beach while I conducted the interview. However, what nobody predicted, including The Met Office, was that one of the worst storms of the century was due to strike Britain that day.

By dusk, tall vehicles on the motorway in front of us were blowing over. Power lines were brought down by uprooted trees, huge swathes of the countryside were plunged into complete darkness as the electricity supply failed and torrential rain was hurled from the skies. Traffic was guided off the motorway and down narrow country lanes, at one point even being directed over waterlogged fields.

We finally arrived at our destination, a small seaside town, several hours late and in pitch darkness. It was still pouring, the fierce winds howling through the deserted streets and whipping the rain almost horizontal. There was no electricity; even the traffic lights were out.

Eventually, we found the address. We climbed out of the car and, immediately drenched, stepped over dislodged branches and other detritus and ran up the path to the front door. We were exhausted and irritable, with a baby who’d been inconsolable for hours.

I knocked on what we hoped was our host’s front door. At first there was no answer, but then a flickering light swayed down the hallway towards the door. A huge shadow darkened the glass, and the door was opened by an extremely tall man holding a storm lantern.

It was a scene straight out of a horror movie. He offered us hot drinks but my wife, completely spooked by then, insisted we went straight to bed. We climbed the narrow stairs, tired and famished, and entered our dark bedroom. My wife barred the door with a chair.

The next day, the weather was improved and the power restored. I asked my questions about the case and the evidence and the killer’s motivation, while my wife took the baby for a walk on the beach. The interview went well, and it was agreed that I could use the story as long as the man’s identity was obscured to protect his children.

Halfway through I realised that the man sitting opposite me was admitting, completely calmly, that he killed his wife in a fit of uncontrolled anger.

That afternoon I reported some of what I was told to my wife. As I repeated the story and saw the growing horror on her face, it dawned on me that staying for the weekend in an isolated B&B with a man possessing such an uncontrolled temper that he could kill his wife with his bare hands, no longer seemed like such a good idea.

We left that afternoon.

If you want to find out what the killer’s real motivation was, and whether or not he was actually guilty of murder, you’ll have to read The Waxwork Corpse!

Or find out more about the Charles Holborne series here.