The Jane Seymour Conspiracy is the fourth book in the Marquess House series, dual timeline conspiracy thrillers with an ingenious twist on a well-known period of Tudor and Stuart history. 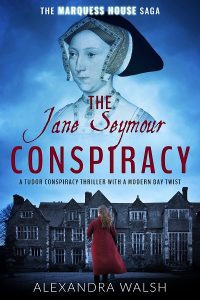 Nineteen-year-old Jane Seymour arrives at court to take her place with Queen Katherine of Aragon. Discovering a court already beginning to divide into factions between Katherine and Jane’s second cousin, Anne Boleyn, Jane finds herself caught between the old world and the new. Determined to have a son, the king appears to be prepared to take whatever steps he deems necessary to secure the Tudor dynasty.

When King Henry VIII finally succeeds in his pursuit of Anne, Jane witnesses the slow unravelling of his interest in the new queen as she, too, fails in her task to deliver a son. Having watched both Katherine and Anne fall from grace, Jane has no ambition for the throne, but when the king begins seeking her out, Jane realises the decision may be out of her hands…

When a set of papers called The Pentagram Manuscript makes its way to Perdita and Piper at Marquess House, they find they have a new mystery to unravel. The manuscript is the tale of five women on a quest to find true love, written while Anne Boleyn was queen. As Perdita begins to unravel the text, she discovers a code that leads to a whole new outlook on Henry’s relationship with Jane Seymour.

But before they have a chance to reveal all, the twins find themselves under threat from a different source. Their second cousin, Xavier Connors, is determined to wrest Marquess House from them. As Marquess House must be passed down through the female line, and Perdita and Piper do not have children, Xavier sees his twin daughter as being next in line. And when Piper is nearly driven off the road, they realise he will stop at nothing to get what he wants…

What really happened to Henry VIII’s Tudor queens? Why was history rewritten?

Will Piper and Perdita be able to unravel all of the secrets before it’s too late…?