The Inspiration for THE OCCUPATION by Deborah Swift

Deborah Swift is the author of PAST ENCOUNTERS and THE OCCUPATION. 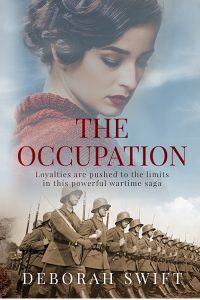 During World War Two, the Channel Islands were the only part of the British Isles to be occupied by the Germans. I saw a picture online of a British ‘bobby’ or policeman talking to a Nazi soldier, and it sparked my interest. Jersey is a tiny island, only eight miles long, so I was fascinated to find out how the population managed to keep up their morale, when as many as fifteen thousand (yes, you read that right) Germans had taken over. What happened to the Jews on the island, or to the other groups that the Nazis considered ‘undesirable’? How did it feel to be invaded by a foreign army?

The story became much more interesting and involved the more I uncovered. At the beginning of the war, Jersey had been ‘stood down’ for military action, as nobody believed the Germans would want such a small territory. Men of fighting age had been sent elsewhere, so it was a population of women and farmers. When the invasion came, it was a total surprise and there were no defences in place. After a brief bombing campaign, the German army just walked in. Before long, white ‘surrender’ flags were fluttering from Jersey houses. 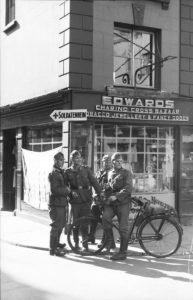 This was the beginning of Nazi rule on the islands, which was supposed to be a ‘peaceful’ occupation. Of course, when you are invaded it might look peaceful, but underneath the tensions soon began to show. The oppressive Nazi force vastly outnumbered the British people left on the island. Those that remained had to find ways to resist, and ways to outwit the unwanted intruders in their traditional way of life. German rule took over – people had to speak German, cars had to drive on the right, many things that had been allowed before, such as owning a car or a radio, were ‘verboten’ – forbidden. The Germans began a vast building programme to fortify the island, which they intended to use at a military base to attack England. The vast concrete fortifications were built by slave labour.

My story is based on several true accounts, although I have welded them together and compressed them into a fictional narrative. Céline and Rachel’s story was inspired by the true Jersey story of Dorothea Weber, who hid her Jewish friend Hedwig Bercu from the Germans. More on this surprising real life story can be found here.

Fred’s story in The Occupation is based on a number of accounts of life in the Germany army, and in the French Resistance. I was interested to examine the idea of occupation from the point of view of both the occupier, and the occupied. What always interests me in fiction is the conflicts that arise because of the circumstances of war, where one nation is pitted against another, and people who might have been quite amicable before the conflict are forced to swear allegiance to a sharp division between one side and another, when in reality, and in people, many shades of grey exist.

For an overview on the occupation of Jersey, the BBC history site has several pages on this topic. For more on Deborah’s books, find her at www.deborahswift.com or on Twitter @swiftstory.