I grew up around boats and the sea has always been an important part of my life and my writing. Our family spent holidays in an old house in Simon’s Town, the former Royal Navy base in South Africa, and from an early age I knocked about in anything that floats: rowing boats, sailing dinghies, windsurfers and yachts. My reading as a boy was also nautically orientated, particularly naval yarns by the likes of Douglas Reeman, Patrick O’Brian, Nicholas Monsarrat and CS Forester. 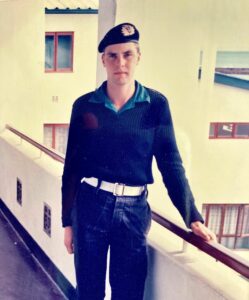 After leaving school, my two years of national service in the South African Defence Force were spent in the navy, based in Simon’s Town. During that period, I had six months at sea on a replica medieval caravel sailing down the Atlantic from Portugal to South Africa in a re-enactment of the voyage of Bartholomew Dias in 1487. The first book I ever wrote (never published) was the story of that voyage.

When I later joined Getaway travel magazine as a photojournalist, I volunteered for any boating assignment: sailing a brigantine around the Seychelles, a felucca down the Nile, a pirogue to Timbuktu, island-hopping by catamaran around Madagascar, taking the mail ship to St Helena Island and sailing a dhow up the Kenyan coast (which provided material for my Somali pirate novel, Whoever Fears the Sea, published by Sapere).

My Jack Pembroke series is inspired by my love of history and the sea, but I also aimed to bring to the fore a theatre of World War II that is not well known and is little written about: the fighting off the South African coast that resulted in the loss of more than 150 Allied ships. 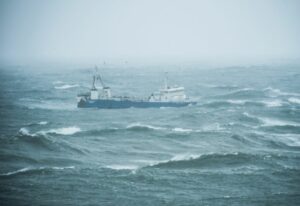 I live in a flat in Cape Town and my desk overlooks the city’s anchorage. Watching the ships come and go each day, I often think of the war years when thousands of vessels were routed around the Cape. When a convoy was in town, Table Bay would be crammed with more than fifty ships, all of them needing protection. In place of today’s yachts and pleasure craft puttering jauntily out of the V&A Waterfront, minesweepers and anti-submarine vessels would make their daily round of the bay.

During the war, the Cape of Good Hope became a vital strategic point on the sea route around the continent and was particularly important during the North African campaign. Once Italy entered the war in 1940, the Mediterranean became too dangerous for Allied convoys, and most were diverted around the Cape. Much preparation was needed before Nazi warships made their way to Africa’s southern tip. The Royal Navy base in Simon’s Town had to be expanded and reinforced, and a fledgling South African Navy created almost from scratch.

First came the German surface raiders, then the U-boats. They attacked within sight of the coast and near the entrance to the harbours of Cape Town and Durban. There are incredible stories of heroism and cloak-and-dagger raids around our coast. For instance, one U-boat slipped into Table Bay and its captain allowed his crew on deck to see the bright lights of Sea Point (of course, all German cities were blacked out at the time). There are many apocryphal stories that surfaced in the folklore of coastal towns, such as German sailors coming ashore and playing soccer with Nazi-sympathising locals, spies passing on information about Allied ship movements and farmers replenishing U-boats around Cape Agulhas. 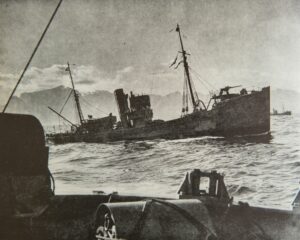 Like many South African children of my generation, I had a fascination with World War II. I built model ships and aeroplanes, played war games in our suburban garden and devoured books about the great campaigns. But I was always mildly disappointed that most of the stories were about the North, and that South Africa seldom featured in the accounts.

During my time in the navy, I began to learn a little bit about the battles fought in local waters and became interested in the exploits of South Africa’s ‘little ships’. If the actions of raiders, U-boats and convoys were soon forgotten by the general public after the war, the exploits of minesweepers and anti-submarine vessels hardly received mention at all. Yet the industrious, daily patrols by these ships kept South African ports open and took the fight to the U-boat wolf packs. It is that story that forms the backdrop to the first two Jack Pembroke adventure novels, The Cape Raider and The Wolf Hunt.