Summons to Murder is set in Victorian England and is the ninth book in the Charles Dickens Investigations series. 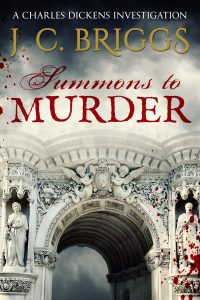 Pierce Mallory, a gentleman journalist, is found dead in his lodgings with a gunshot wound in his head and a duelling pistol beside him.

Though the death is deemed a suicide, Mallory’s friends — including Charles Dickens — don’t believe that he would have taken his own life.

Dickens therefore returns to the scene of Mallory’s demise, along with Superintendent Sam Jones from Bow Street. On further investigation, they soon find evidence that Mallory was murdered.

A notorious philanderer, there are plenty of people who could have wanted Mallory dead — including abandoned lovers and jealous husbands.

And as Dickens and Jones dig further into Mallory’s personal affairs, it seems that there are more shocking scandals waiting to be uncovered…