David Field is the author of the Carlyle & West Victorian Mysteries. 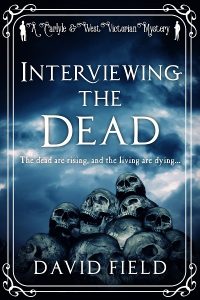 As a historical novelist in search of bygone eras to recreate, I’ve always been fascinated by the late Victorian period. It was a time of contrasts, with vast scientific, medical and technological breakthroughs coming at a time when ordinary folk were obsessed with communicating with the dead. Victoria seemed destined to rule forever over a rich empire, while her subjects in its industrial cities, and most notably in its London capital, were existing in conditions of abject poverty.

Following the success of my Esther & Jack Enright mystery series, which began with the search for Jack the Ripper and ended just as the nineteenth century was about to, I was urged to return to this rich seam of inspiration, and there was – for me, at least – one obvious place to start.

When Arthur Conan Doyle abandoned medical practice and created his fascinating character Sherlock Holmes, he was inspired by his memory of a real life Sherlock. His name was Dr Joseph Bell, and he had taught anatomy to his classes of medical students at Edinburgh University, one of whom had been Doyle himself. Bell had what was then a unique approach to his analysis of the cadavers that were to be found on his mortuary slab, something that is second nature to modern forensic examiners, but was revolutionary in its day. He approached ‘cause of death’ by examining, not just insides of the bodies, but the clothing and personal possessions with which they arrived, and telltale indications on the skin, such as needle marks, abrasions, rough working hands and suchlike. From this he made logical deductions that were of value to police in unexplained death enquiries, and he taught his students to apply the same techniques when they went out into the world.

There must have been several generations of medical graduates from Edinburgh who were taught ‘the Bell method’, and it was no great stretch of the imagination for me to create Dr James Carlyle, anatomist and general surgeon at Whitechapel’s London Hospital – a medical doctor with the same professional training as Conan Doyle and the same inquisitive, logical mind as Joseph Bell.

His first challenge – described in the first novel in my new series, INTERVIEWING THE DEAD – is to debunk the panicked belief among the populace of the East End that the spirits of those buried in a Plague Pit in Aldgate have returned to take their revenge for the disturbance of their resting place. That belief has taken hold easily, given the obsession with Spiritualism that gripped the country during this period.

But there were also other ‘spirits’ abroad, and they were advocating for great social change. Chief among these were the Suffragists, who campaigned for ‘votes for women’ and Suffragettes who took on entire police forces in public demonstrations. There were also other groups of feminists, as we would call them today, who advocated for equality of admission to professions such as medicine and the law. This was how Dr James Carlyle’s daughter, Adelaide, was created, as a young woman whose opinion of men and their dominance of society could not have been any lower – until she meets my third new character, Matthew West.

Although the Anglican Church was ahead of all other Protestant movements in the 1890s, it was demonstrating a social elitism that drove away ordinary working folk, and left the pastoral door open for more working-class religious initiatives and crusades among the poor. ‘Methodism’ had become a religious movement of its own, with its own hierarchy, but its progenitor, ‘Wesleyism’, still had its head above the parapet, and Wesleyan street preachers such as Matthew West might be found on corners, in market places, and outside factory and dockside gates.

Matthew has his own reasons for wishing to hose down any belief in the return of vengeful spirits of the dead, and when he finds himself associated with Dr Carlyle in the search for the truth, he comes up against the fiery Adelaide, who works as her father’s assistant. They influence each other’s views on life as they are drawn imperceptibly into a mutual attraction.

The stage is set for my next series. I hope you’ll join me in following the exploits of this unlikely trio, and I look forward to learning your reaction to them.