We are delighted to announce that we have signed a new Leicester-based crime series by C V Chauhan. 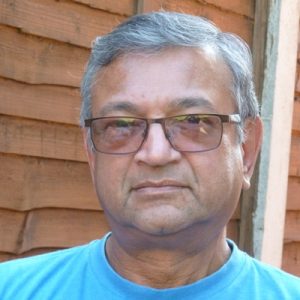 The series follows Detective Rohan Sharma as he unravels a succession of dark and thrilling mysteries.

“I’m absolutely delighted to have been signed by Amy and her team at Sapere for my new, three-book series which breaks new ground in the genre. I’ve been made most welcome by all members of the team and by my fellow authors. It’s a very friendly and supportive community, and I feel privileged to be part of it.

“If you like your crime fiction with added spice, then you’ve come to the right place. THE DANCE OF DEATH, my debut novel, introduces you to Rohan Sharma, an able, erudite detective who lives in the heart of the Asian community in Leicester and who has a talkative, African grey parrot for company. Recently divorced, he is the father of two children.

“In the first instalment in the series, Rohan Sharma and his team hunt for a psychopathic killer while dark forces undermine his work and put others in danger.

“THE DANCE OF DEATH will be published in the near future, and I’m currently working on the next Rohan Sharma novel. I’m not going to give away too much at the moment, but suffice to say it’ll have an international dimension. More on this later…”