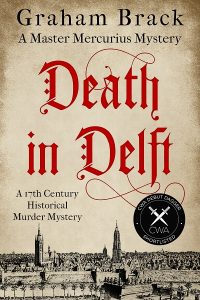 The first three books in the Master Mercurius series are published or available to pre-order, and we are delighted to have signed up the next instalment: THE NOOSE’S SHADOW. The fourth book sees Mercurius free from the demands of the Stadhouder – William I of Orange – for once as he is asked for help by a poor young woman whose husband faces execution for a murder he swears he did not commit. How can Mercurius refuse?

Graham says, “I was already part of the Sapere family after Amy signed me to write six Slonský novels, so I knew Sapere Books was the right place for my Dutch series too – and Slonský will be back! We’re a very supportive bunch of writers who enjoy each other’s successes, and the Sapere team is simply excellent. I couldn’t imagine going anywhere else with the Mercurius books.”

Amy says, “I have already worked with Graham on eight published books since we launched in March 2018, and I am thrilled to have signed his next book. I hope there will be many more! Fans of his previous series are already calling for a return of Slonský, and they seem equally smitten with Master Mercurius. I thoroughly enjoy reading Graham’s books and look forward to editing many more in the series.”

Click here to find out more about the Master Mercurius Mysteries