Researching for A CANOPY OF STARS by Stephen Taylor

Stephen Taylor is the author of A CANOPY OF STARS, a thrilling historical 19th century saga stretching from the legal courts of Georgian London to the Jewish ghetto in Frankfurt. 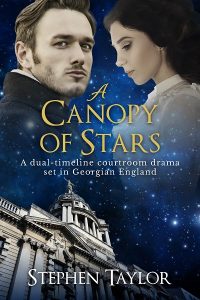 When I start to write a novel, the first thing I always do is open a document that I call ‘Conceptualising’. I put down my initial thoughts, sketch out a skeleton storyline. Then I start researching and populate this document with historical facts and ideas that I can use.

When I came to write A CANOPY OF STARS, my first port of call was a website — Punishment at the Old Bailey: Old Bailey Proceedings Online. Here I could view actual cases going back hundreds of years. I came across the trial of Peter Shalley (REF: T17900113-17) that took place in 1790. Shalley was a German immigrant who was accused of the theft of half a sheep’s carcass worth just 40 shillings. His story, through an interpreter, was that he was offered a shilling to carry the carcass to Oxford Road from a field outside London. When he said he didn’t know where Oxford Road was, the man said: ‘Don’t worry, I’ll walk behind you and each time you come to a junction, look behind you, and I’ll point which way to go.’ When he got to Oxford Road, the Watchman challenged him, and the other man ran away. To me, this was a reasonable defence — he had been duped.

But the system was stacked against him, for while he was an educated man, he was a Jewish immigrant and spoke little English; he was seen as just another piece of London’s low life to be dispatched by the hangman with little ceremony and no one to mourn him. Even the valuation of the sheep at exactly 40 shillings made it a felony (not a misdemeanour) and therefore punishable by death.

I found this disturbing; it may have been over two hundred years ago, but I was stung by the injustice of the case. I was upset; the wrong done to this man was so plain to see and became like a nagging toothache. So I resolved to restructure A CANOPY OF STARS; it would still be a Georgian courtroom drama, but — through the character David Neander — I would also write Peter’s own story as I saw it. Images danced in my mind; what sort of man was this Peter? Why had he left his native Germany; why had he come to England?

In England, this was a time of the enlightenment; there was a clamour for reform. Power, however, lay in the hands of the aristocratic landowners who viewed reform as a threat. In the German states, this was a time of nationalism, a distrust of all things un-German. This is the backdrop to David’s story. How did he navigate his way through it?