We have received the very sad news that one of our authors, Bob Cornett, has passed away age 69. With Kevin D. Randle, Bob co-authored the Vietnam Ground Zero Military Thrillers and the Scorpion Squad Military Thrillers under the pseudonym Eric Helm. Kevin remembers Bob below. 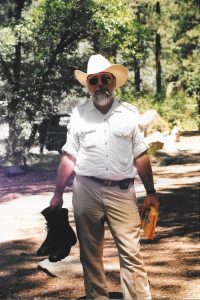 On April 1, Robert Charles Cornett, “Bob,” sometimes known as R C Squared, passed away. Bob and I had been friends for nearly a half century. We met while we were both taking Air Force ROTC at the University of Iowa in the early 1970s. We shared an interest in science fiction and writing and a few other things.

Bob had originally majored in both physics and Russian, which seemed to be a very difficult path to follow. Eventually, he changed majors, and we both graduated in 1975. Bob remained in Iowa City.

It was in 1975 that I learned the Project Blue Book files had been declassified and were open for public scrutiny at Maxwell Air Force Base. Bob and I drove to Maxwell and began a search of those records. We might have been the first two outsiders to see those records. At the time, the names had not been redacted and we spent two days going through the index, writing down the names of all the witnesses for the unidentified sightings. At the time, this was a unique record, but today the information is available on the Internet. That search translated into a few magazine articles about Project Blue Book and sparked Bob’s interest in UFOs.

Writing had always been one of his goals, though I suspect he was more interested in writing science fiction than he was in writing about UFOs. We had written a book of science fiction short stories that was never published, but some of them have been posted to www.thesciencefictionsite.blogspot.com.

Bob had suggested that we talk to James Van Allen (a space scientist) about UFOs, because they knew each other. I thought it was just that Bob had taken a class from Van Allen and it was a sort of nodding friendship. But, one day, in the Physics Building, Van Allen got in the elevator with us. He looked at us and said, “Hi, Bob.”

Van Allen sat down with me for two hours to talk about UFOs. Bob missed the meeting for some reason, but it would not have happened had he not known Van Allen. That Van Allen would talk to me about UFOs said something about Bob.

We did investigate cattle mutilations for the Aerial Phenomena Research Organization (APRO). Jim Lorenzen (APRO’s co-director) had called me, asking me to look into them. With Bob, we went to Minnesota and spent a week to ten days there, learning what we could. We had been told that these mutilations were part of Satanic rituals, but we found no evidence to support that claim. Nor did we find anything to suggest that UFOs had anything to do with it.

All this resulted in Jim Lorenzen introducing Bob at a UFO convention as one of his top investigators. The irony was that Bob belonged to the rival National Investigations Committee On Aerial Phenomena (NICAP). But the recognition did help Bob place some stories about UFOs in the magazines that were popular at the time.

We began to attend science fiction conventions with a view to meeting the editors working for publishers. We thought that if we met them, if they knew who we were, then we might have a leg up when a manuscript was submitted. I’m not sure if that ever worked in our favour, but we did meet Sharon Jarvis, an agent looking for writers. She recognized our military connection and one day called, wondering if we could write books about the Green Berets in Vietnam. We said yes and set about creating those books, now all recently republished under the banner of Vietnam Ground Zero. This did not erase our quest to write science fiction. I don’t know if those books helped or not, but we did eventually publish science fiction.

I was at home one night when Bob called and told me he had started a novel that dealt with a war in space. We planned to meet the next day, and he suggested that I bring along something. His “chunk” of the book, as we came to call them, was in the third person, but mine was in the first person. Before we were done, the book, Seeds of War, had five first-person narrators, not all of whom survived the conflict, and the third-person beginning in which Earth declared war on another planet. I mention this only because we used Lyndon Johnson’s Gulf of Tonkin speech as the basis for the one in the book. We didn’t have to change much. It was a commentary on war. It was a strange attitude for us because of our connections to the military.

Bob and I attended many science fiction conventions, even after we had books published. At a party hosted by Berkley Books, we ended up as volunteer bartenders at about two in the morning. A very drunk science fiction fan wanted a Scotch, but we had run out. He was so drunk that we didn’t think he would know the difference, so we made some Scotch for him, using gin, Pepsi, and some wine, and we worked hard to make it look like Scotch. The man took it away happy.

We were at another science fiction convention in Minneapolis and were in the hotel room, working on a book. One of the characters was named Tom Waters, and I wrote the line, “Waters rushed up hill.”

And I said, “Why not? No one will ever notice.”

From that point on, we often attempted to hide a bit of humour in the books for those astute enough to catch it. No one ever mentioned the waters rushing up hill to either of us.

Bob was popular on the science fiction circuit. I think it was a combination of things, including some of the stories that he wrote. He would do readings periodically, and I noticed that the fans sat quietly listening to his stories. He was sometimes slow in getting the story written, but it was always a good one. He was an imaginative writer, with a keen ear for human speech.

He was habitually late for nearly everything. We were to meet in Iowa City one day, but I got interested in a movie and figured that Bob would be late. So, I watched the end of the movie and was more than an hour late. Bob showed up about twenty minutes after I got there.

Bob eventually left Iowa City, moving to Moulton, Iowa, and our writing sessions waned at that point. We did a number of limited series, including one about time travel that started with Remember the Alamo, in which the time travellers return to 1836 to win the battle for the Texicans by using modern weapons.

But with the move to Moulton, our contacts lessened. I became involved in UFO research and Bob stuck closer to the science fiction. I think the last science fiction convention we attended together was in 1991, about the time of the Gulf War. We hadn’t been writing much together by that time. The Vietnam Ground Zero series had wound down and we didn’t have any contracts for science fiction novels.

Bob had trained as an EMT while living in Moulton and at some point had become a letter carrier. With his wife, MaryAnn, he eventually moved to Albuquerque where they hosted a few conventions.

Bob was interested in firearms and had a massive knowledge about them. Some of the writing about Vietnam showed just how much he knew about weapons. He was very good at describing the combat of the time. He was honourably discharged from the Air Force and later the Marines.

He was a very good friend, and I wish that I had been a better friend to him. I knew that his health had been poor these last few years. I had him on the radio version of A Different Perspective, and I was saddened by what I heard as we talked about UFOs. He just wasn’t as sharp as he had been when he was younger. You can listen to that show here: https://www.spreaker.com/episode/19655144

In the last several years, maybe the last couple of decades, he had lost his fire for writing. Bob Tucker (a mystery, action-adventure, and science fiction author), who turned out to be a good friend, had said in his later years that he had retired from writing. Neither Bob nor I could understand that attitude … but sometimes writing is a very difficult task. I think Bob retired from it without really saying that he was retired.

I had thought of writing a tribute to my friend, but this turned into more of a remembrance. I’m surprised by how much I miss him.