Read the first chapter of LETTERS FROM MURDERER now

When pathologist Jacob Bryce got to the third stab wound, he knew that it was not one of the ordinary back-alley robberies which constituted most of the murders in New York City’s notorious 4th Ward.

Most of the blood, concentrated around the woman’s chest and stomach, had coagulated into a thick skin, indicating that death had taken place several hours beforehand. Bryce had to use alcohol to clean and loosen the blood in order to view those first puncture wounds. 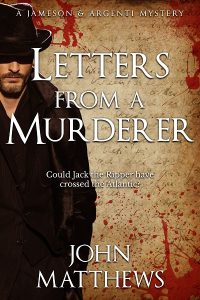 It was the practice at Bellevue hospital that whenever a body was brought in for autopsy one of the crime-scene detectives should also be present to pass on key information when queried. Bryce looked towards the attending detective, whose name he couldn’t recall and who still looked somewhat in shock.

‘What time did you first discover the body?’

‘Uh, we got there, myself and a colleague from Mulberry Street, at just before midnight.’

‘And the first people to discover the body — when might that have been?’

The detective briefly consulted his notes. ‘Another girl from the Riverway Hotel first noticed her in a side-alley forty minutes before we arrived.’

‘Much activity in the area that time of night?’

Bryce nodded thoughtfully. Add on at most half an hour for her body to first be discovered then the two hours since midnight taken up with initial forensics at the crime-scene and transporting the body in an ambulance-wagon to Bellevue.

The deep gash to the side of the woman’s neck, severing the carotid artery, wouldn’t on its own have been unusual for a street robbery; it was the fact that it was combined with so many stab wounds — Bryce had counted eight so far. Blood flow from the neck-wound was less, indicating that the stomach wounds had come first.

By the time Bryce had located the fourteenth stab wound, he realized he was in unchartered waters; it was like nothing he’d seen before. The smell of body waste mixed with carbolic and alcohol was heavy in the air. The young detective was now even more wide-eyed and looked slightly nauseous, one hand going to his mouth.

Bryce noticed a small X marked on the woman’s left shoulder. He’d get a photo taken of it later. A keen follower of Virchow’s principal, Bryce had a neat line of glass jars prepared and labelled, ready — once they’d been initially examined and weighed — to take each of the body’s internal organs. But he soon discovered that two of those jars would go unfilled. He looked towards the detective.

‘Were any body parts removed from the scene? Perhaps bagged and taken elsewhere for examination … or inadvertently left at the crime scene?’

The detective looked flustered. ‘No. None that I know of.’

‘The scene was searched thoroughly — nothing left there?’

Bryce wondered whether the scavenging rats and dogs of the area might have run off with the woman’s liver and kidney. Half an hour? Unlikely in such a short period, but regardless the killer had first removed those organs. Yes, like nothing he’d seen before — although he had heard of something similar.

Bryce looked at the clock on the wall. Five hours before Inspector McCluskey was in his office for him to pass on the information.

‘You’d never guess it from any of my household staff,’ Maitland commented.

There was a light guffaw from Linhurst, but Colby remained serious. ‘I don’t know. I see the similarities daily in autopsies. Every single organ in the same place — liver, stomach, spleen — and every bone and joint the same, too, right down to the little finger.’ Colby held up a pinkie. ‘I wouldn’t discount it so hastily if I were you.’

‘I’m not convinced.’ Linhurst tapped his forehead. ‘It’s all here, you see. And Darwin hasn’t adequately explained how a monkey could possibly —’ Linhurst broke off as a club usher approached.

‘I apologize for the intrusion, gentleman, but there’s an urgent call for Sir Thomas.’

Colby unfolded the note held out on a silver tray. ‘Sorry. Excuse me a moment.’

He followed the usher towards the vestibule call booth and at the other end Police Commissioner Grayling wasted little time with preamble.

‘There’s been another one.’ Silence. Grayling wasn’t sure if it was purely shock or Colby hadn’t immediately made the link. He added: ‘Similar to the other eight.’

‘No. You’d hardly credit it when I tell you. It’s across the sea: New York.’

But Colby wasn’t that surprised. With the last murder more than a year ago now the supposition was either that the Ripper was imprisoned, dead, or had moved on.

‘Who is handling the investigation there?’

‘McCluskey.’ Octave lower, derisory. ‘But, no matter — you’ll need to go over as soon as possible.’

‘I see. I hazard he didn’t request my involvement.’

‘No. I did. Your contribution is invaluable to match the crimes. There’s also the possibility that it’s a copycat murder: as you’re well aware there has been far more in the press about this than we’d have liked. But if a link is proven we still have by far the heavier case burden: eight murders that remain unsolved.’

Colby didn’t need reminding: three years that had consumed his life like never before. The number of murders attributed to the Ripper ranged from five to as many as eleven, but eight was the number Colby had personally cited as having links. No past investigation had attracted such strong public furore and a Fleet Street eager for fresh readers hadn’t helped.

‘There was also a mark left on this one,’ Grayling said. ‘A small X on her left shoulder.’

‘It might be significant, it might not. Or indeed, it might mean that this is a different man entirely: not the Ripper at all. We won’t know until we get the full details.’

‘Yes, I see.’ Colby sighed. ‘One problem, though. I have an important speech at the Royal College of Surgeons in two weeks time that I must be here for. I won’t be able to go until after that.’

‘I’m not sure matters will hold that long — aside from the politics. McCluskey would no doubt start bleating about our incompetence again. Can’t you delay it — speak there later?’

‘No, it’s an annual event. But that’s not the only problem.’ The rest of Colby’s hectic social calendar flooded in: his son’s upcoming investiture at Sandhurst, a dinner-dance invitation from Lord and Lady Northbrook that he’d face untold woe from his wife for missing. ‘I fear I’m not going to be able to go over.’

‘I’m sorry to hear that. I suppose I’ll just have to tell McCluskey the bad news — or probably good from his point of view. He’ll be relieved no doubt that we aren’t interfering, as well as now have first-hand proof of that incomp—’

‘I have a suggestion,’ Colby cut in. The thought had struck as Grayling started riding him. ‘One of my best students went over to New York four months ago. An aunt who he was close to — she raised him after his mother died — was very ill. He could stand in for me.’

‘But would he be competent enough?’

‘Very much so. My main protégée, you could say. Of all my students, he was the only one to identify crucial links in the Ripper case without my constant prompting. Uncanny — almost as if he knew the man personally.’

‘And, of course, I could give him added consultation by telegram and letter from London.’

‘Yes, I suppose it could work,’ Grayling said at length. ‘But if he’s picked up on any of the scuttlebutt in London, tell him not to use our pet-term, Inspector McClumsy — get us off on the wrong foot. And what’s his name, by the way?’

The voice had a slight echo, as if it was at the end of a tunnel, and it took Finley Jameson a moment to focus on the wizened Chinaman hovering over him and realize where he was. The smell of opium smoke and incense was heavy and Jameson wasn’t sure if the mist was just in the air or behind his eyes.

‘Mr Jameson… Lawrence is here. Says he has an urgent message for you. Shall I show him in?’

That snapped Jameson to. He sat up, rubbing his head. Years back in his university days, he’d had a shock of wavy, wild blond hair, but now, cropped short, it looked much darker.

‘No … tell him to wait. I’ll be out in a few minutes.’ He didn’t want his assistant, Lawrence, to see him like this. He wouldn’t understand.

‘Do you want me to get Sulee to bring you some tea? Help you waken?’

‘Yes … thank you. An excellent suggestion.’

Sulee, more distant through the mist, gave a small bow as she went to make him tea. Her lithe beauty was apparent despite the plain high-collar shirt and loose trousers of any laundry worker.

He recalled Ling offering for a dollar that Sulee give him a scented oil massage while he smoked; for another dollar she’d apply the oil with her naked body and then lick it off inch by inch ‘like a cat’.

Jameson thought he’d politely declined, but when later he seemed to remember Sulee’s oiled body writhing against him, he wasn’t so sure. Then halfway through her eyes became vertical ovals and her skin transformed to that of a tiger’s, complete with stripes — unless it was the candlelight throwing shadows through a nearby palm — so perhaps it had been a dream after all.

The main thing to attract Jameson to these dens was that wonderful merging between dreams and reality. But was death always what triggered his visits? Certainly, the first time he’d visited one had been not long after his mother’s death and it couldn’t be sheer coincidence that his visits since had often been following his and Colby’s most traumatic autopsies. Now, too, this visit to Ling’s had come straight after his aunt’s death and often his past visits to dens had taken place when other problems had arisen in his life. Was he escaping personal demons or merely enjoying a harmless ethereal distraction? After a moment, he shrugged the thought away. As often, he found himself more at ease studying the intricacies of the lives of others than his own.

Compelled to keep reading? Buy Letters from a Murderer now!