Mary Tudor – Sinned Against or Sinning? by David Field

David Field is the author of The Tudor Saga Series. The Queen In Waiting is the fifth book in the series. 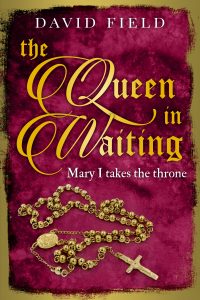 There were many victims during that turbulent period in English history that we call the Tudor era, and not all of them were obvious. ‘Popular’ history has a habit of creating fixed mental images of those who lived their lives in the maelstrom of Tudor Court politics, and it’s only when you examine the actual facts that the doubts begin to creep in. A  prime example of a Tudor ‘identity’ whose place in the ‘fake news’ of the period has set her character in concrete is Mary Tudor, the only child of Henry VIII and his first – and longest lasting – Queen, Katherine of Aragon. Mention Mary and the word ‘Bloody’ appears like magic before her name, conjured up by usage and with little regard to the circumstances that led her to burn Protestants at the stake.

Mary was born in February 1516, the only surviving child from her mother Katherine’s long and miserable litany of stillbirths and miscarriages. Katherine may well have suffered from gynaecological problems that Mary inherited, because Mary is recorded as having endured menstrual disorders as a young woman. These were no doubt the early warnings of the phantom pregnancies and uterine blockages that would deny her issue of her own, and lead ultimately to her death.

But in her very early years we are given a picture of a rosy-cheeked, chuckling little infant with her father’s distinctive red hair being bounced gleefully on Henry’s knee as he resolutely hid from the world his inner torment that Mary was not a boy. His obsession with begetting a male heir, more perhaps than any natural lust for Anne Boleyn, led to Katherine’s eclipse, and as she entered puberty Mary was forced to watch from very distant sidelines as her beloved mother suffered the public humiliation of the annulment of her marriage to Henry, and her replacement on the throne by ‘the night crow’ Anne Boleyn. Anne completed the insult by giving birth, in almost indecent haste, to Mary’s half-sister Elizabeth. 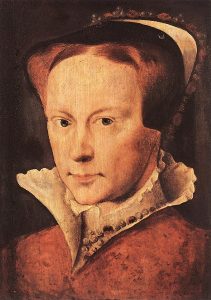 Humiliation was piled on humiliation as Mary was declared a bastard, and her place in the succession was taken by Elizabeth. The newly demoted ‘Lady Mary’ was stripped of her own former household and sent to live with Elizabeth in Hatfield House, Hertfordshire, denied access to her mother Katherine, who pined her way to a heartbroken death in a remote castle in Cambridgeshire. Mary was reported to have been ‘inconsolable’ at her mother’s death, and suffered from unspecified illnesses for several years during which she was estranged from her father.

The execution of Anne Boleyn and the bastardisation of Elizabeth would have been of little comfort to Mary once Henry’s new wife Jane Seymour gave birth to the heir apparent Edward, who, under the baleful influence of the Seymours who governed the nation as part of his Regency Council, proved to be far more aggressively Protestant than his late father, while Mary was equally determined to both pursue and promote the Catholic religion of her late mother. The two never saw eye to eye, and during a disastrous attempt at reconciliation during the Christmas of 1550, the thirty-four year old Mary was reduced to tears when rebuked by her thirteen year old half-brother, in front of the entire Court, for her fervent adherence to her faith.

The death of Edward was probably the greatest catalyst for Mary’s subsequent actions. It was learned that in his fear that England would slide back into Catholicism should Mary become Queen, Edward had bequeathed the throne to their distant cousin Jane Grey, from an obscure Leicestershire offshoot of the wider Tudor family. Not only that, but the Council of State initially supported Jane, and Mary was obliged to claim her throne by superior force of arms.

She was now 37, beyond the customary ‘sell by’ date of Tudor women, unmarried, childless, and suffering from gynaecological issues. She was probably both flattered and relieved to receive an offer of marriage from her second cousin Philip of Spain. There seems to be little doubt that for him it was a marriage of greed, furthering his ambition to rule most of Europe, but for Mary it seems to have been a love match. Then history repeated itself through a phantom pregnancy and a terrible slow decline with what may well have been ovarian cancer. One can only feel desperately sorry for the lonely old woman on her death bed when one reads that, on learning of Mary’s demise, Philip wrote to his sister that “I felt a reasonable regret for her death.”

Is it surprising that Mary Tudor was hardly a bundle of laughs during her lifetime? Her mother was publicly humiliated, she herself was bastardised by her loving father, her half brother ridiculed her faith, her Council of State preferred a country girl over her as Queen, and her younger sister was prettier, more socially accomplished, and more loved by the people, while her husband regarded sexual relations between them as some sort of public duty. Add to that her almost permanent ill-health, and it is difficult not to reach behind the public persona she left behind in order to give her a consoling cuddle.

In the latest novel in my Tudor series, The Queen in Waiting, I chose to depict the reign of Mary through the eyes of Elizabeth, another victim of their times. I could only describe the events of Elizabeth’s life through the actions of Mary, and they were harsh when considered without regard to the events that forged them. Sinned against or sinning? Your choice.

Order THE QUEEN IN WAITING here.

Or find out more about The Tudor Saga Series here.

Image credit: Portrait of Mary I of England and Ireland by Hans Eworth. (Public domain).