Graham Brack is the author of the JOSEF SLONSKÝ INVESTIGATIONS series.

When I started writing the book that became Lying and Dying, I didn’t have a detective in mind. There would have to be one, of course, and because I wanted it to be realistic he would have to be part of a team, but the character of Slonský was not central to my thinking. 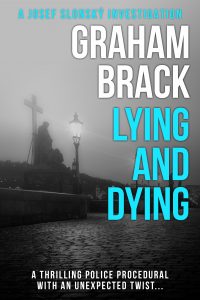 I can remember precisely when he appeared. My brother and I were at the National Theatre; during the interval I described the story, and together we arrived at the notion that a senior Czech detective must have worked under Communism and would therefore probably have some skeletons in his closet. Moreover, everyone he knew would have similar problems, so it would be understandable if he had little or no respect for anyone of his own vintage.

The world-weary detective is a lazy trope, so I made Slonský enthusiastic about his work. He loves his job. He believes it matters, and he has no patience with corrupt colleagues. And then it came to me that the biography I had proposed for him, in which he spent around half his career under Communism, and half after it, meant he must be coming up to retirement. That provided a rich vein of character analysis, because he dreads retirement; there is nothing else in his life, so he wants to go on as long as he can, and the fact that his bosses know that gives them the only hold they have over him.

Thus, Captain Lukas is able to get him to take a trainee officer, Jan Navrátil. Slonský has had partners before, but they quickly apply for transfers. Navrátil can’t do that. He is a fast-tracked police academy officer with a law degree, fierce intelligence, a strict moral code and an open and trusting nature. Slonský comes to realise that Navrátil is incorruptible and probably always will be, and that when he is gone Navrátil has the potential to reach the very top of the tree – provided he listens to Slonský’s sage advice. Shaping Navrátil’s police career will give Slonský the nearest thing he can have to a legacy. Later they are joined by a woman officer, Kristýna Peiperová, who doesn’t have a law degree but balances that by knowing much more about how the world works. Slonský enjoys training her too, and he honestly does not know which of them will get the top job first, but he doesn’t care. Male or female doesn’t matter; all he wants is someone who can bring about the clean, efficient police force he wanted to join. 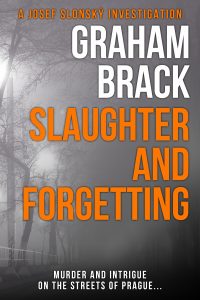 I sat down to write one Saturday morning, and after a page or so the police car pulled up and Slonský climbed out. Battered, inelegant, disinclined to waste any effort, cunning, cynical and sharp-tongued, he appeared in my mind’s eye and somehow took over. A story in which he was a necessary figure but not the star was seized and made into a section of his biography. Whenever he walked into a scene, it livened up, and I found if I just listened to him he told me so much about himself.

He doesn’t eat well, but he eats a lot. He is a typical Czech, he believes, devoted to beer and sausages. He lives in a dingy one-room flat, so he spends most evenings in bars. He was married, but his wife left him, and he took it for granted that they were divorced, which proved not to be the case. He believes that nobody can work on an empty stomach, that you should never miss a chance to eat or pee (because you don’t know when the next one will come) and that not everything about the old days was bad.

His name was derived from the Czech word slon, meaning elephant. It seemed appropriate, given his size and his memory, and it was gratifyingly similar to the Czech surname Slánský.

After Lying and Dying was published, a woman wrote to me to say that Slonský was appallingly non-PC in his language but his instincts were good; he was meticulously fair, and therefore free from prejudices such as sexism and racism; and, she said, while she wouldn’t invite him to dinner, if she were ever murdered she would want him to be investigating her death. I think he would allow himself a smile if he heard that.