In Memory of Alan Williams

We had very sad news back in April that one of our authors, Alan Williams, fell victim to COVID-19. He passed away in a care home, aged 84. 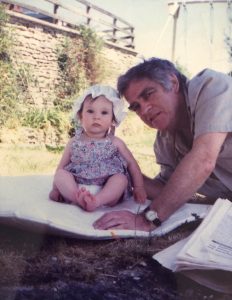 Alan with his daughter, Sophie

Williams graduated from King’s College, Cambridge, in 1957 with a BA in Modern Languages. He then led a rich and varied life as a journalist and foreign correspondent, working for publications such as the Cardiff Western Mail and the Manchester Guardian. He reported on a number of world events, including the Hungarian Revolution, the Algerian War and the Vietnam War.

His experiences as a reporter later influenced his novel writing. Barbouze – the first instalment of Williams’ Charles Pol Espionage Thriller series – follows a British journalist who accompanies a French spy on a mission in North Africa. A later novel in the series, The Tale of the Lazy Dog, is a heist story set in Southeast Asia. Williams’ writing won him much acclaim: he has been described as “the natural heir to Ian Fleming” and “one of the important figures in the change and development of the espionage novel”.

Williams has three children – Sophie, Owen and Laura – and three grandchildren, Roxy, Willow and Fox. Our thoughts are with his family at this difficult time.

You can read Alan Williams’ full obituary in the Guardian.

Photographs courtesy of Sophie and Laura.