It’s a truism that history is a set of facts left to posterity by the winners, and for historical novelists like me there’s always another ‘take’ on every so-called ‘fact’ we’re taught at school.  A prime example of that is the enduring legend of ‘The Princes in the Tower’.

The first to get their stories organised were the Tudors who benefitted considerably from the unexplained disappearance from the Tower of London of the Yorkist royal heirs Edward, Prince of Wales, and Richard, Duke of York. 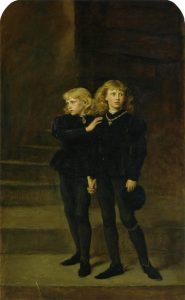 When Henry Tudor defeated Richard of Gloucester in an obscure field in Leicestershire we now know as ‘Bosworth’ (even though that town didn’t exist then), there was no one left on the Yorkist side to challenge his claim to the throne, given that the princes were no more.  But it was essential to point the finger away from ‘the person most likely’ – the obvious suspect for the disappearances/deaths, and the Tudor propaganda machine swung into action.

Sir Thomas More possible lived to regret the assistance he gave to Henry VIII in perpetuating the myth that the person behind the disappearances of the princes from the Tower had been a close relative of theirs, namely their uncle.  But More was the first to point the written finger at Richard of Gloucester, particularly after Sir William Tyrell, during the reign of Henry Tudor, allegedly confessed to having done the job in the pay of Richard.  But tortured men will eventually say whatever their torturers want to hear, and the alleged confession came, second hand, through the mouth of the torturer. 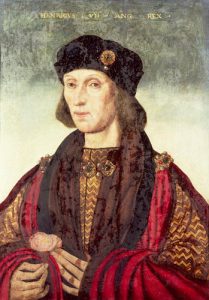 Never one to miss an opportunity to ingratiate himself with a royal patron, that literary prostitute William Shakespeare built Thomas More’s accusation into a horror story of a crook-backed, slew-footed, psychopathic freak who did away with anyone who stood between him and the throne.  Actors such as Laurence Olivier and Benedict Cumberbatch then provided us all with a visual image to go with the verbal hype.  The net result of all this ‘fake news’ was that we all grew up believing that Richard III had done for the two little boys under his guardianship.

But spin the wheel 180 degrees, and there was someone else who benefitted equally from a sudden absence of Yorkist claimants to the English throne.  He had an alibi, of course, because at the most likely date of the crime – the Summer of 1483 – he, Henry Tudor, was in exile in Britanny. 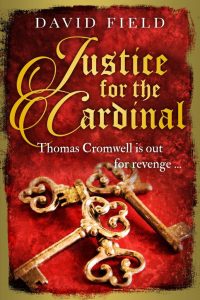 But back home in England, ‘Mummy’, the formidable, wily, scheming Margaret Beaufort, was preparing the runway for her favourite son’s safe landing with an invasion force.  She also had a useful second son – Henry’s half-brother the Duke of Buckingham – who was Lord High Constable of England, with responsibilities that included security at the Tower of London.  Go figure, as they say.

Having written a novel from the Tudor perspective (The Flowering of the Tudor Rose), and having suffered death by blog from dedicated ‘Ricardians’, I took up the case for the defence in Justice for the Cardinal, due for publication by Sapere Books later this year.  The central character in this novel is Richard Ashton, grandson of the Duke of York who escaped from the Tower, only to be executed under his assumed name of ‘Perkin Warbeck’ by a paranoid Henry VII.

‘You pays your money . . . .’, as the old saying goes.   The jury will forever remain out on who really ordered the murder of the princes.  In the meantime, we historical novelists can play on both halves of the pitch.