His Father’s Ghost by Linda Stratmann

Linda Stratmann is the author of the MINA SCARLETTI INVESTIGATIONS, a traditional British detective series set in Victorian Brighton. 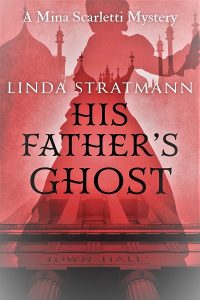 More than a year ago, I determined to write a book in which Mina Scarletti, disabled by the scoliosis that twists her spine and cramps her lungs, is taken ill and solves a mystery while confined to bed. It is not a new concept. In The Wench is Dead, Inspector Morse solves a Victorian murder while in hospital, and in Josephine Tey’s The Daughter of Time, Inspector Alan Grant, hospitalised with a broken leg, explores the fate of the Princes in the Tower.

But these are historical puzzles, and therefore considered suitable to engage the mind of a bored invalid. In His Father’s Ghost, Mina has additional challenges. She is intrigued by a current conundrum, the disappearance of a local man while out sailing, declared legally dead, but his actual fate unknown. Her doctor, however, has advised her against any activity that might tax her delicate health, and that includes solving mysteries. She has to use all her ingenuity to gather the information she needs. In doing so, she finds that she has uncovered evidence of past crimes and scandals. Her enquiries are a catalyst that set off a train of events that ultimately have dramatic and life-changing consequences for several prominent citizens of Brighton. 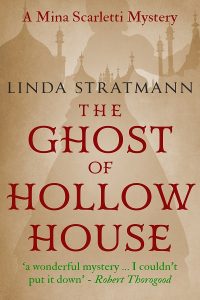 One of the themes which I explore in this book is hallucination. Mina, when stricken by a fever, sees and hears things that reveal what is troubling her. The son of the vanished man, disturbed by significant events, has terrifying visions in those dark hours that lie between sleeping and waking.

I really enjoyed my research for this book. I visited the fascinating Police Cells Museum of Brighton, and read about the curious spiritoscope, an apparatus designed to prove that it was spirits and not the medium who cause the movement of the divination table.

It was my real pleasure to include two characters who have appeared in previous books, the flamboyant actor Marcus Merridew, fresh from his acclaimed season as Hamlet, and the creepy young photographer Mr Beckler.

While editing the manuscript, which was completed at the end of 2019, I was struck by how Mina’s plight echoes our current time. She is ill with a lung infection, and effectively on lockdown. But when she scents a puzzle, it gives her strength. She needs not only warmth and air and nourishment, but material to keep her busy mind alive.