Nothing But The Truth is Out Now 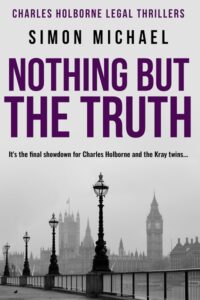 Finally, Detective Superintendent “Nipper” Read’s taskforce has a chance to take them down.

The catch: Read needs barrister Charles Holborne to testify against them, while the Krays have evidence against him which would end his career and send him to prison.

Caught in the middle, and with his pregnant partner’s life and his career at stake, this time Charles has no choices left.

Can Charles put his past behind him once and for all? Will the Krays twins’ criminal hold over London finally be put to an end?

Or will everything come crashing down for Charles Holborne…?