A Treasonous Path is Published Today

Congratulations to C. P. Giuliani, whose absorbing Tudor espionage novel, A Treasonous Path, is out now! 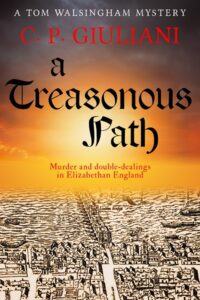 Tom Walsingham is back in London, being groomed for intelligence work by his spymaster cousin, Sir Francis.

An anonymous informer has started sending letters from the French ambassador’s residence, claiming to have bribed the man’s secretary to pass on information.

The informer has discovered messages between the French and Mary, Queen of Scots, which could harm the English Queen Elizabeth.

When someone who works for the French Ambassador is killed in suspicious circumstances, Sir Francis sends Tom to investigate the matter – and to uncover the identity of the informer.

Tom must find a way into the French Ambassador’s good graces and make friends within his retinue without giving himself away.

And as the news from Scotland grow more and more alarming, it becomes imperative that Tom unveils the identity of the secret informer and exposes the intrigues at play.

Can Tom unravel the mystery and protect the Queen? Will he unmask the killer?

Or could he find himself the target of a deadly plot…?