Death of a Poet is Published Today

Congratulations to Keith Moray, whose gripping historical thriller, Death of a Poet, is published today!

Death of a Poet is the first book in the Ancient Egypt Mystery series. 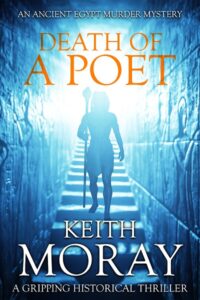 Hanufer of Crocodilopolis, newly appointed Overseer of the Police in Alexandria, is keen to prove himself worthy to both the citizens of the city and to the Pharaoh, Ptolemy Philadelphus.

When an altar is desecrated with a poem intended to insult the Pharaoh and his wife, Queen Arsinoe, Hanufer and his trusted sergeant Sabu are tasked with discovering who committed the outrage.

As the poet himself, Sotades the Obscene, was recently executed, Hanufer sets about finding out who else is familiar with his poetry.

Before long another poet is found murdered – a poem by Sotades left near the corpse as a macabre calling card.

With a growing number of murders to be investigated, Hanufer must make his mark and solve the mysteries.

But just where — and how high up — will the clues lead him?

Did Sotades really drown? Is there a serial killer on the loose in Alexandria?

And can Hanufer appease both the Pharoah and the gods?