Kim Fleet is the author of the Eden Grey Mystery Series, coming soon from Sapere Books.

What first got you into writing? 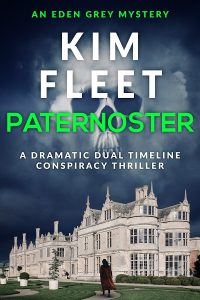 I started writing when I was 9. My dad gave me a book called Write Your Own Novel. It was the first time I’d make the connection that the books I loved reading were written by real people, and I thought I’d like to have a go. Dad also gave me a hardback notebook with beautiful marbled endpapers to write in. I filled it with large, round writing; enormous speech marks; and classic lines of dialogue such as, “Hello, Queen Elizabeth the First, would you like a cup of tea?”

What are your typical writing habits?

All my planning is done longhand. I write out character lists, character portraits, and scene outlines with just enough information to get writing but with enough space for the story to grow on its own. I also draw maps of places and maps of connections between characters: this shows me instantly whether I’ve got enough material for a full novel or if I need to come up with another subplot. It helps to avoid the dreaded soggy bit at 30,000 words in. I do a lot of the planning in cafes as I like the buzz of people around me (and the cake). When it comes to writing, though, I use a laptop and sit up in bed to write with the radio on in the background. It’s terrible for my back but does mean I eat less cake.

The first three chapters are always a nightmare, mostly because I’m still feeling my way into the novel and don’t know the characters fully yet. Those chapters will be rewritten time and time again. Once I got 30,000 words into a novel, realised I’d got the wrong character as the murderer, and had to scrap the whole thing and start again.

Every novel requires some research, whether it’s on places, historical detail, or forensic procedures. Research is so absorbing it’s easy to get lost in it, so I discipline myself to do enough to feel confident to start writing and no more. During the writing process, if I realise I need to research something, I write it on the manuscript and come back to it once I’ve got a complete first draft.

Do you ever find your characters controlling their storylines?

Absolutely. The characters become incredibly real, not only when I’m writing but during ‘normal’ life, too! I often have a voice chuntering in my head as I walk round the supermarket or when I’m gardening. In recent years, in addition to hearing characters I’ve started to be physically touched by them, too. It sounds bonkers, but sometimes when I’m in the car I can feel my character’s knees poking into my back. I think I need to create characters who are a bit shorter.

Do you ever feel guilty about killing off characters?

It’s very hard to kill off some characters, but I think that’s necessary to the story. In crime, there has to be something at stake, an offence against society that we care about and want the sleuth to avenge or solve. If I don’t care who dies, if it doesn’t hurt me while I’m writing, then there’s no power in the set-up and nothing for the sleuth to put right.

All the time. I either stop too soon or drivel on for too long!

Which book do you wish you had written?

Red Joan by Jennie Rooney. It’s a crackingly good read. It’s the book I always recommend to friends when they say they don’t know what to read next.

I can sing ‘Three Blind Mice’ in the Aboriginal language of Pitjantjatjara.

Paternoster, the first book in the EDEN GREY MYSTERY SERIES is available to pre-order now.