An Uncivil War is Published Today

When Henry I dies with no legitimate male heir, the nation is thrown into chaos. 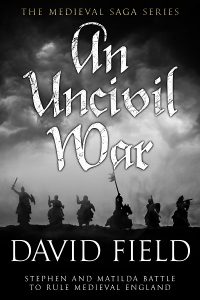 The two rivals for the crown are Henry’s daughter Matilda and his nephew Stephen of Blois, both of whom are determined to emerge victorious.

A bitter struggle ensues which threatens to reduce England to a barren wasteland and many ordinary people find themselves torn apart from each other in the confusion of deciding which side to fight for.

One of those caught up in the fray is young soldier Richard Walsingham who is fighting alongside Stephen. But his sister Elinor is employed as a companion to Matilda.

Which of the rivals will emerge triumphant? Can the nation be pieced back together again?

Or will more than lives be lost in this uncivil war…?