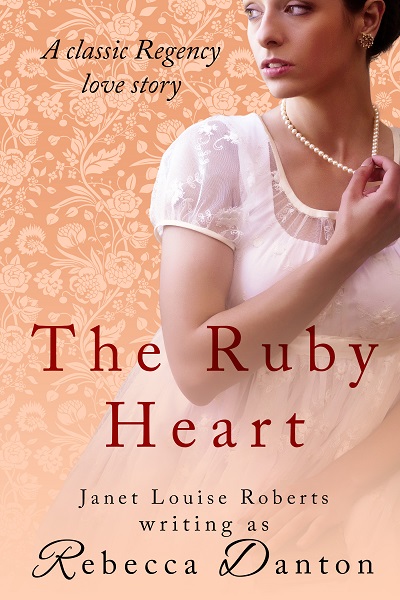 She can’t abide him… so why is she falling in love with him?

Beautiful, spirited and outspoken, Lesley Dalrymple harbours a deep distrust of men. As a wealthy heiress, she’s grown cynical of their motives and has sworn she will never marry.

With his drinking, gambling and womanising, the arrogant Burke Penhallow stands for everything Lesley despises in a man.

But as a fellow godparent to her young nephew, he also represents her only chance to rescue the little boy from a life of cruel abuse.

Lesley unhappily agrees to marry Burke, resolving that their marriage will be in name only.

But despite herself, she quickly finds her defences crumbling as she falls under the spell of emotions she can’t fight.

Is she able to trust Burke? Can a rakish bachelor ever truly be tamed?

Or is her heart in danger of being broken…?

A classic Regency romance, The Ruby Heart by Janet Louise Roberts  is a classic historical love story with dashes of humour and suspense.